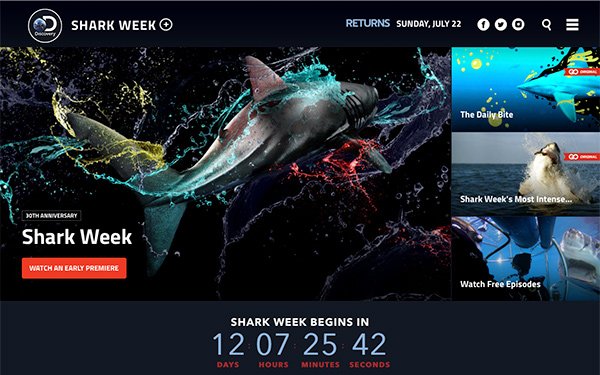 Coinciding with its 30th anniversary, the Discovery Channel’s popular annual Shark Week will offer a series of companion magazines.

The issues are available across newsstands or online through onnewsstandsnow.com. Shark Week kicks off July 22.

As of today, Discovery: Sharks—The Definitive Handbook was already sold out online. Each of the issues retail from $9.99 to $10.99.

Single commemorative magazine issues have long been a staple of magazine stands. In recent years, they have become a way for brands to extend their reach across audiences and deepen revenue streams through capitalizing on a single event or cultural trend — from a celebrity death to the royal wedding.

Often, the pub's charge surpasses the cost of a traditional issue would retail. Plus, it directs readers back to digital content.

Some outlets are approaching this popular avenue in new and inventive ways.

Earlier this year, Moviebill&n bsp;published a special Avengers AR commemorative magazine that had audience members engaging online. The issue sold out at theaters within 48 hours.

Moviebill reported that the issue went out to 1 million moviegoers and soon counted 2 million scans across its AR content. Two weeks after the issue’s release, the company was still receiving scans from readers.

The company also released an issue for Jurassic World: Fallen Kingdom, with issues planned for other summer blockbusters.