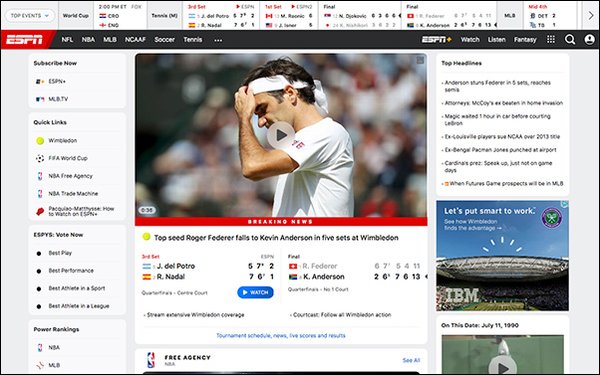 SimilarWeb released its top 100 media rankings for the first half of 2018 revealing little in the way of shifts among major brands, but showing some surprises among celebrity and general news sites.

The rankings are compiled by measuring traffic and engagement across publications.

Also in the top 10 were cnn.com, foxnews.com, washingtonpost.com and drudgereport.com, among others.

Two new sites found their way into the top 100. Nickiswift.com, a celebrity site that explores the  gritty side of stardom, came in at 79, while vox.com, the general news site from Vox Media, was 73.

Sports sites maxpreps.com, sbnation.com and rotworld.com all dropped from the top 100, due to the end of the football season per SimilarWeb’s blog.

The rankings also investigated which non-branded keywords were at the top, revealing a micro study of the past six-month news cycle. Topping the list were Anthony Bourdain, Kate Spade, Xxxtentacion and Avicii, all celebrities who recently died.

Those keywords were followed by words denoting current events and Internet memes including “world cup,” “yanny laurel,” and Michael Cohen.

According to SimilarWeb, the keywords show which stories are sending readers to their most trusted news sources.