Outside Partners With Gotham Group To Produce Film, TV 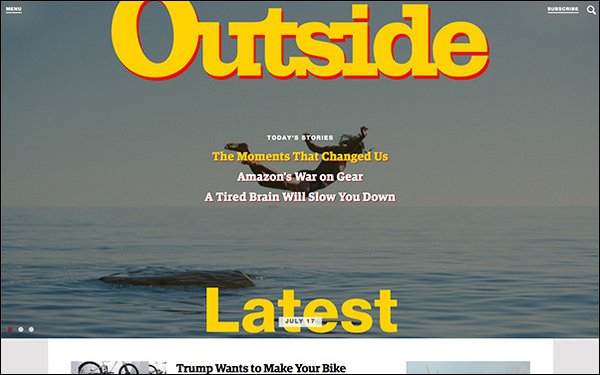 The active lifestyle company that publishes Outside magazine is partnering with management and production company The Gotham Group to produce film and TV projects.

A newly created production arm of the company, Outside Studios, will produce video content based on the brand's editorial. Outside produces  300+ stories a month online, a large pot to dip into for potential film and TV projects.

Ellen Goldsmith-Vein and her team at The Gotham Group are helping determine which areas of coverage and stories could be turned into video projects.

Outside feature articles have inspired movies and shows like "Everest," "The Perfect Storm," "Into The Wild," "Blue Crush" and "127 Hours." Those projects have grossed $700 million in box offices worldwide, Larry Burke, founder of Outside, told Publishers Daily.

Burke says Outside has a research group of 22,000 people, which they can turn to and figure out which stories can go “from print to screen.”

The Gotham Group is also setting up meetings and introducing the Outside team to a number of top film and television executives, Burke said.

Gotham Group could become production partners with Outside in the future, “based on the nature of the project itself that we are producing,” Burke said.

The goal, Burke added, is for Outside to “be the authority in producing the kind of films we publish in digital and print," the stories that center around an “active and adventurous lifestyle.”

Gotham Group, which also has Village Voice Media as a client, has produced movies such as “The Spiderwick Chronicles” and the “Maze Runner” franchise.