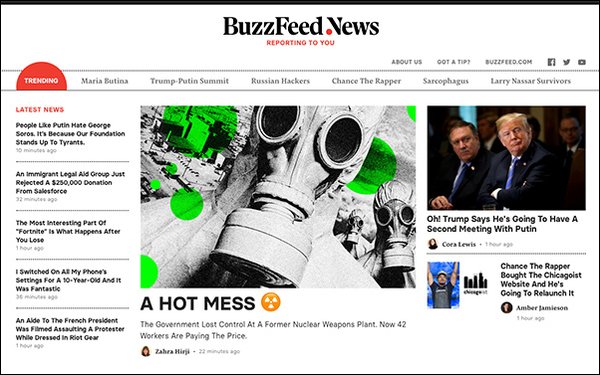 BuzzFeed has launched a standalone site for its news coverage, called BuzzFeed News.

The idea is to separate BuzzFeed’s factual news and in-depth reporting from its social media-focused (and light-hearted, pop culture-centric) quizzes and listicles.

News stories will continue to run on BuzzFeed’s main homepage. The BuzzFeed News site will also include links to other BuzzFeed content.

The layout and design of BuzzFeed News more closely resembles a traditional news site, with less bright red and yellow than BuzzFeed’s look. BuzzFeed News also has its own logo, in red and black, and a tagline: “Reporting to you.”

“As BuzzFeed News expands further into new areas, like original series, we want to continue to elevate its look, feel and user experience,” BuzzFeed CEO Jonah Peretti told staff in an email, according to Adweek.

BuzzFeed’s original reporting ranges in general interest topics, such as its investigative series on Russia that cinched the website as a finalist for a Pulitzer Prize.

Instead of organizing editorial into categories like politics, sports and tech, a Trending bar sits at the top of the homepage, featuring the most important topics of the day curated by BuzzFeed News editors. As of Thursday afternoon, topics included “Trump-Putin summit,” “Russian hackers” and “Marian Butina.”

“I don’t think anybody finds it confusing that ABC does news programming and scripted shows on prime time,” he said. “On the web, the conventions are less clear. I think we’re trying to be very clear. We feel our audience wants that.”

BuzzFeed has given popular verticals. like food-infused Tasty, its own site, too. It’s found success giving its verticals their own room to shine: Tasty has branched out into producing cooking products and cookbooks.