Spike Lee Takes On The KKK, Trump -- And Race 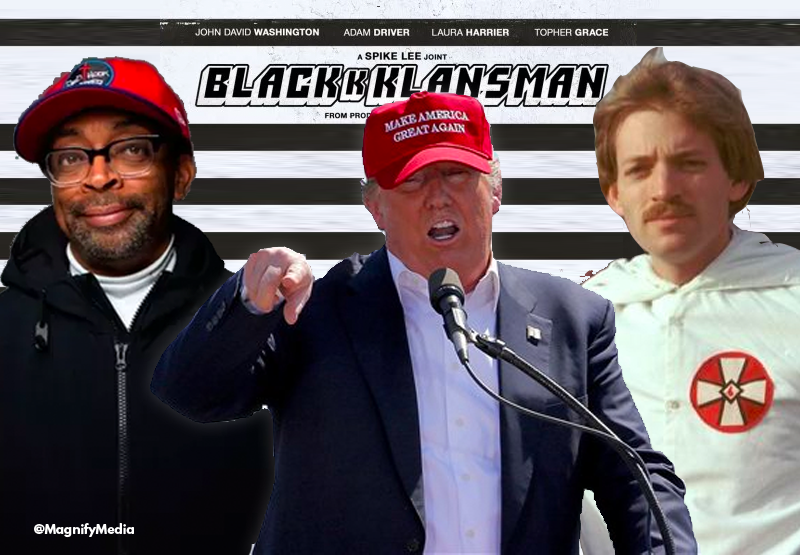 Sitting in the darkened theater, even before the first images appeared on the screen, I was thinking about Spike Lee.

He’s spent a career making films that try to bridge worlds. He is, on one hand perhaps the best-known black director in American cinema. But at the same time, his films work hard to speak to a wider audience.

So going to see “BlacKkKlansman,” I was feeling a bit defensive. Given the rising tide of racism and violence in America today,  I steeled myself for a film that would be angry. Would Lee place blame? Would he blame me?

But as the film unspooled, I was surprised, again and again, as the now-61-year-old director took me on a journey.

Based on the true story of the black detective who infiltrated the KKK, Lee's “BlackKklansman” is a comedy -- until it’s not. It’s a history lesson. It is a sharply focused character criticism, and it’s prophetic warning. It is in turns honest, engaging, and gently but profoundly disturbing.

It’s the mature work of a director whose filmography,  from “Joe’s Bed-Stuy Barbershop” in 1983 to “She’s Gotta Have” it in’86, to “Do The Right Thing” in ‘89, is an extraordinary chronicle of America’s black experience.

The theater was dark, and the audience was mostly white, but Lee loomed large both on-screen and off.

Then the lights came up, and Lee walked to the front. He had been in the theater, which I didn’t know but had somehow felt. The Producers Guild-sponsored screening had promised Lee’s attendance on the invite, but somehow I hadn’t remembered he’d be there.

I tensed slightly, expecting a Q&A session that would explode in anger about Trump, and the status of Afro-Americans in the United States.

But Lee was a surprise -- thoughtful and focused. He had plenty of issues with Trump to be sure, but in many ways, the film was about David Duke, the KKK’s issues with Jews, and with America’s deep racism, now brought to the surface.

A lot has changed since 1989, the year of “Do The Right Thing.” But as audiences will certainly understand, a lot has not changed. Radio Raheem is updated as Ron Stallworth, a black police officer who sets out to change things from the inside, rather than being an outside protester.

And Lee had mellowed somewhat. He told The Atlantic, “You can’t let anger rule your life. It’s just not productive.”

And yet, “BlacKkKlansman” comes at a time when the issues he's been addressing his entire career are now front-page news.

Lee draws direct lines from David Duke to Trump.  You may not know it, but Duke’s followers were chanting “America First!” as a KKK slogan long before Donald Trump began to use the phrase.

“BlackKklansman”’s origin as a real story blurs the line between fiction and nonfiction in ways that make conclusions hard to ignore. In one powerful scene, Harry Belafonte tells the real-life story of Jesse Washington, a mentally impaired black farmhand who in 1916 was mutilated, burned, and lynched after being convicted of raping and murdering a white woman in Waco, Texas.

Belafonte’s account is painful. As Lee explained, that scene was shot on the very last day of filming, giving Belafonte time to see if he was up to the effort.

Lee likes taking things head-on. "Yeah, we don’t try to be that subtle!” he told The Guardian. “Why pussyfoot around? Let’s get to the point!”

And the point that Lee is trying to make is hard to disagree with:  America is a country divided, even as David Duke sides with Donald Trump and Trump tiptoes around the growing rage that he's fostering.

Can a film motivate social action? Clearly, Spike Lee hopes it can.