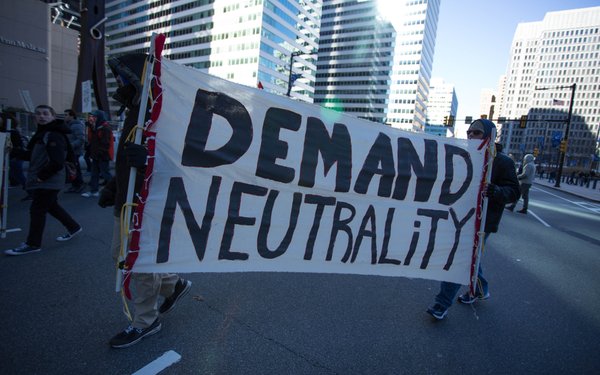 The Federal Communications Commission's recent decision to repeal the net neutrality rules was "not adequately reasoned" and should be vacated, a coalition of advocacy groups and web companies argue in new court papers.

"The new FCC acted based on a lopsided discussion of the supposed cons of open Internet rules, of which it found a myriad, and their pros, of which it found none," Public Knowledge, Free Press, Mozilla, Vimeo and others write in a brief filed Monday with the D.C. Circuit Court of Appeals.

The groups are asking the appellate court to scrap the FCC's recent decision to repeal Obama-era rules that prohibited broadband carriers from blocking or throttling online traffic and from charging companies higher fees for prioritized delivery. In December, the FCC voted 3-2 to revoke those rules, and to prohibit states from passing or enforcing their own net neutrality laws.

FCC Chairman Ajit Pai said the prior regulations were "heavy handed" and depressed investment. But net neutrality proponents counter that the rules are necessary to prevent broadband providers from engaging in censorship, and from harming competitors.

Advocates who have examined the carriers' stock reports reached different conclusions than Pai regarding whether the former rules harmed investment; Free Press said last year that investment by 13 major broadband providers increased in the two years after the FCC passed the net neutrality regulations.

Free Press and the others say the FCC's decision should be vacated for numerous reasons, including that the move runs counter to open Internet policies that were first announced by the FCC in 2005, and culminated in the 2015 net neutrality rules.

"For the first time since the beginning of the commercial Internet, a start-up cannot be certain that it can launch a new Internet-based service without interference from BIAS (broadband internet access service) providers," the groups write.

They add that the FCC lacked a good reason to reverse course on net neutrality.

"The FCC wrongly found that the abolition of the rules was necessary to encourage investment by BIAS (Broadband Internet Access Service) providers, even though many BIAS company executives had assured the world that the rules would not deter investment," the advocates argue. "While preoccupied with safeguarding the investment incentives of the BIAS gatekeepers, the FCC showed no regard for Internet investment. In its view, while the fortunes of BIAS providers had suffered intolerably from the open Internet rules, those of edge providers would suffer negligibly from these rules’ absence."

A coalition of 23 attorneys general filed a separate appeal over the repeal. Among other arguments, the attorneys general contend that the FCC "unreasonably disregarded" concerns that broadband access providers will "engage in abusive practices."

"The Commission’s analysis is deeply flawed," the attorneys general write. They note that the FCC asserted in its order that broadband providers will voluntarily "refrain from blocking, throttling, and similar practices."

But this belief "incorrectly assumes that providers historically displayed such self-restraint," the attorneys general write.

"It was the Commission’s long-standing enforcement of open Internet policies that compelled BIAS providers to refrain from harmful practices that injure consumers and undermine public safety," they argue. "The relatively minimal evidence of such harms in the United States is the result of the protective rules that the Commission has abandoned, rather than evidence that those rules are unnecessary."

The attorneys general also argue that the FCC lacked authority to prohibit states from passing or enforcing their own net neutrality laws.

USTelecom president and CEO Jonathan Spalter said Tuesday that providers support rules that are "applied consistently across the entire internet ecosystem," as opposed to rules that affect only broadband access providers.

"When it comes to maintaining our open, innovating internet, consumers deserve smart, modern and unambiguous protections that apply consistently to all parts of the internet ecosystem -- not the backwards and balkanized approach these state attorneys general would impose on America’s internet consumers," Spalter stated.

Broadband providers have argued for years that it's unfair to subject them to neutrality rules while leaving "edge" companies like Google and Facebook free to decide what material to display. For instance, Verizon argued in 2012 court papers that the FCC's former open Internet order (a weaker version of the 2015 net neutrality rules) was "under-inclusive" because it applied only to broadband access companies and not search portals, app store operators and "other participants in the Internet ecosystem."

But net neutrality advocates say it doesn't make sense to apply the same principles to Internet access providers as to search engines, social networking services or other companies that offer content -- especially given the state of broadband competition. Currently, many customers only have a choice of one or two Internet access providers, but have a variety of options for finding online content.