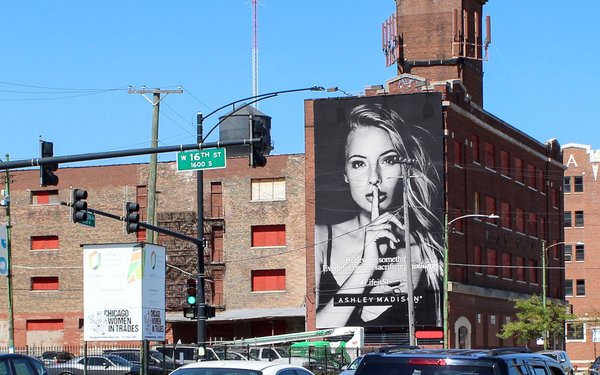 It would be hard to imagine advertising for Ashley Madison that wouldn’t be controversial. So a new billboard in Chicago might only be noteworthy because it advertises the service for cheating adults by parodying the high-minded Colin Kaepernick campaign for Nike.

Ashley Madison is looking for another location for the billboard in Oakland, California. The ad was done in-house by creative director Brian Offenheim.

The dating service tries to present a positive side to adultery: basically, that some spouses wander but are happy with their marriages and want to keep them, and that adulterous affairs help, not hurt.

But as a taboo, adultery has quite a history, admits Paul Keable, vice president for branding and communications. “It’s the only sin that is mentioned twice in the Ten Commandments,” Keable admits. “But it’s not the evil it’s said to be.”

Ashley Madison signed new members at a rate of about 15,000 a day in 2017, according to audited results. This year, it’s up to 19,000. (Those are people who sign up. The active members are far fewer, and many don’t stick around.)

Keable says the billboard, with an unmistakable reference to the NFL, is aimed at men because Ashley Madison research says the fall season is  when men are most likely to join. Women look to Ashley Madison in summer months -- but significantly, moms get interested right about now, when kids go back to school and the house is empty.

“This is their me-time,” Keable says. For them a campaign on Paramount cable outlets will break on Sept. 17. An ad depicts a mom who has decided she needs some Spanish lessons, and turns to Ashley Madison to get some exciting one-on-one instruction. “Raphael,” the mom says from her bed,  “show me again how you roll your Rs.” Apparently,  he’s pretty good at it.

Coming soon are commercials themed around the midterm elections.

Asked if he’d ever read  Christopher Buckley’s novel “Thank You For Smoking,” about a tobacco industry lobbyist and his social outcast pals who lobby for the gun and alcohol industries, Keable laughs. “No, but I saw the movie,” he says. “I was the fourth member of that group, but I got cut out [of the film].”

In the midst of the #MeToo movement, Keable suggests Ashley Madison provides a service. “Our biggest competition is the workplace,” he says, noting there might be fewer transgressions if executives spent time with willing and consenting adults instead of behind closed office doors harassing employees.