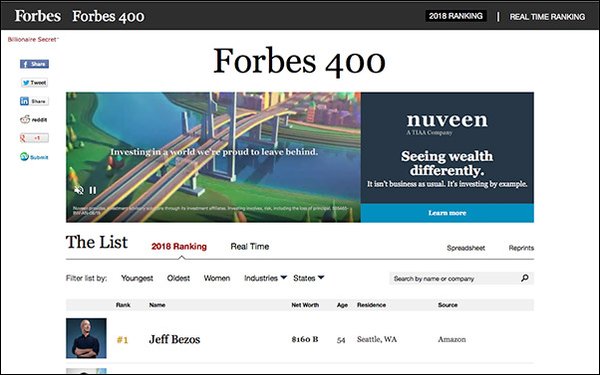 Forbes is adding a new ranking to the "Forbes 400," its list of the 400 wealthiest Americans, released today. It is partnering with investment company Nuveen to score America’s richest people on how much they have given in their lifetime to philanthropy.

“We think the new scoring adds a strong dimension to our signature list and hopefully sparks a national dialogue that encourages us all to look at wealth differently,” Jessica Sibley, senior vice president of U.S. sales, Forbes Media, told Publishers Daily.

Jeff Bezos, who is no. 1 on the list as the richest person in America with a net worth of over $160 billion, scored a 2.

In percentage terms, George Soros has donated more than any other Forbes 400 member.

The ranking “will help elevate conversations about the importance of responsible investing and giving back to society,” Sibley added.

The philanthropy score was assessed by Forbes’ editorial team of nearly 36 journalists. They estimated each list member’s total lifetime giving — based on public filings, such as tax forms for private foundations — and the percentage of their fortune they have donated.

As part of the scoring, Forbes’ team also looked at other philanthropic causes the list members participate in, such as whether those on the list have signed the Giving Pledge, how personally they are involved in their charitable giving and how quickly their foundation distributes dollars.

The philanthropy scoring highlights the importance of “impact investing," or investing for both a financial return and a positive social or environmental impact.

Nuveen, a subsidiary of TIAA, is the sponsor of the "Forbes 400" list and associated editorial content, including two features: “20 Profiles of Impact Investing” and “The Portfolio – Investing Strategies of America’s Wealthiest.”

In the "Forbes 400" print issue — which comes out at the end of this month — Nuveen will run a high-impact butterfly gatefold around the "20 Profiles of Impact Investing" feature.

All editorial programs and Nuveen’s BrandVoice articles have social promotion.

“Collaborating with Forbes as part of our new brand campaign was a natural fit, allowing us to create a new way to look at wealth with a focus on the positive impact that investments can ultimately have when directed for good," Marty Willis, Nuveen CMO, told Publishers Daily.

She added: "We hope this new ranking will create interesting stories and powerful conversations around what it means to have a real impact; inspiring others to look deeply at their own ability to have a positive influence on the world in which we live.”