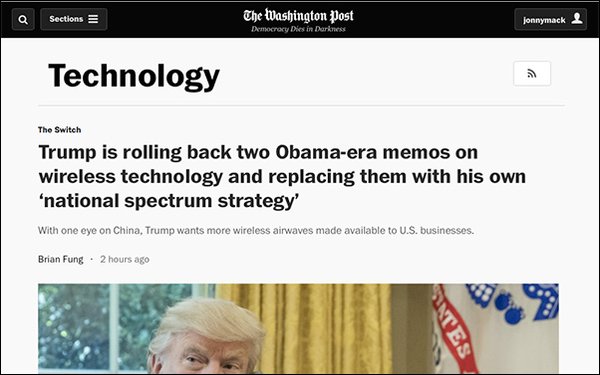 is expanding its technology coverage, adding 11 new positions to its offices in San Francisco, Seattle and Washington, D.C.

WaPo has 14 journalists who cover tech. The new reporter, editor and video journalist positions will bring the total to 25.

“The technology industry — with its dramatic impact on every individual, every industry and the political arena — is at the center of a profound national debate,” stated David Cho, business editor of The Washington Post. “We aim to cover developments in the industry and the broader societal issues with vigor, deep insight and high impact.”

Two technology reporters and one editor are already based in the San Francisco office. The bureau will now house a video studio, too.

The publisher has gradually expanded its business section under the ownership of Amazon CEO Jeff Bezos, doubling its staff over the past five years.

The newspaper's business section will also hire an additional Washington, D.C.-based breaking news reporter. Former Wall Street Journal reporter Cat Zakrzewski was hired in August to anchor a new “Tech 202” newsletter, which will focus on the intersection of Washington and Silicon Valley.

Business-focused publishers have increasingly reorganized their newsrooms to double down on tech coverage.

Fast Company’s recent redesign to its print magazine was influenced by changes in the tech industry. Forbes tapped Laura Mandaro as assistant managing editor, technology and innovation, based in San Francisco, to hire four additional writers to beef up Forbes’ coverage on tech and innovation.
journalism, newspapers, technology
Next story loading