Gab Isn't, For Now: What's The Next New Hate-Mongering Platform? 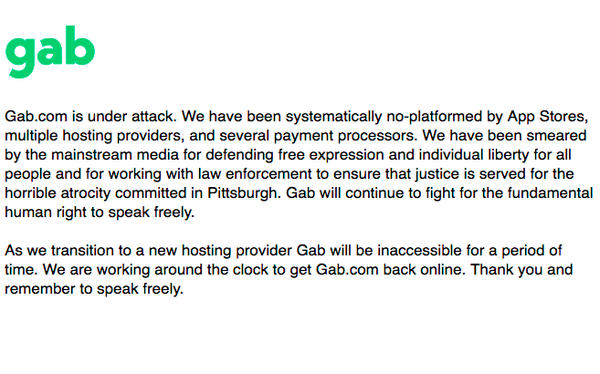 The good news is that alt right social network Gab.com is down thanks to swift action by various mobile app stores and site-hosting providers. The bad news is that it will likely be up and running again soon, or if not, something equally detestable will emerge in its place. What's so remarkable about Gab's takedown for me, is I had never heard of it before Saturday's attack on the Tree of Life synagogue in Pittsburgh.

But I wasn't surprised to learn that in a relatively short period of time, it had emerged as a clearinghouse for organizing fringe conspiracy theories, hate speech and anti-Semitic ferment. We all like to pretend that social media is a relatively clean, well-lighted place, but the reality is that dark pools organize and spread in ways the mainstream are rarely aware of -- until something like Saturday happens.

Take down one Gab.com and three will sprout up in its place. Bump Infowars from the most well-lighted social platforms and its own site traffic will spike as its followers find an alternative, albeit more direct route.

The truth is that there is a marketplace for hate and the invisible hand of the digital economy enables it to spread.

And it's not just on dark, below-the-radar sites. Sometimes, hate is spread across our biggest and most public ones. Last week, Nation of Islam leader Louis Farrakhan used Twitter, Facebook and YouTube to spread his anti-Semitic attack comparing Jews to "termites."

I don't know what the solution is except to continue outing these attacks when they happen and holding the platforms that enable accountable.

Don't get me wrong -- I'm not suggesting society curtail free speech, or when it's hateful. I'm talking about platforms that explicitly organize the kind of hate speech that incites imminent lawless action and violent attacks on other people. Sadly, that is sometimes hard to know before the fact, but it is eminently clear afterward.

I'm curious what others think. I'm also curious whether any of you are aware of other emerging networks, sites or hubs for organizing hate that should be outed. If so, please post them in the comments field to shed some light on them too.