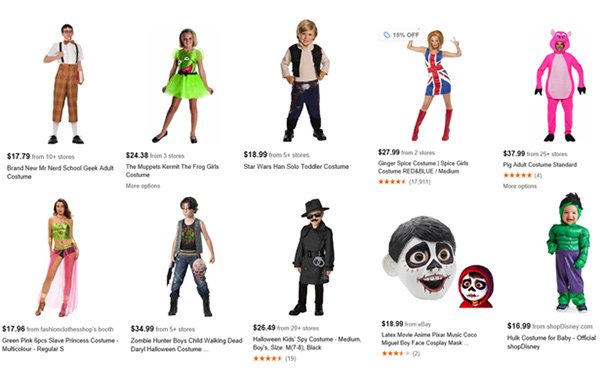 It wouldn’t be Halloween without some data on the most and the least clicked-on advertisements for costumes.

Disney’s characters seemed to lose favor this year. Minnie Mouse came in farther down the list at No. 14 and Maleficent at No. 16.

To determine the least and the most popular costumes, Kantar Media examined U.S. desktop clicks on product listing ads for 2,988 costume keywords between October 1 and October 26, 2018.

Wonder Woman and Batman were the most clicked-on costume ads. Superheroes and their archenemies were also popular. Spider Man came in at No. 6, Catwoman at No. 8, and Flash at No. 10. And the Joker came in at No. 19 to round out the top 20.

Among advertisers, HalloweenCostumes.com ranked in the top product listing from October 1 through October 26, with 17.4% of product listing ads click share on the keyword group “costume.” The online specialty retailer also ranked second in text ad clicks with 14% click share.