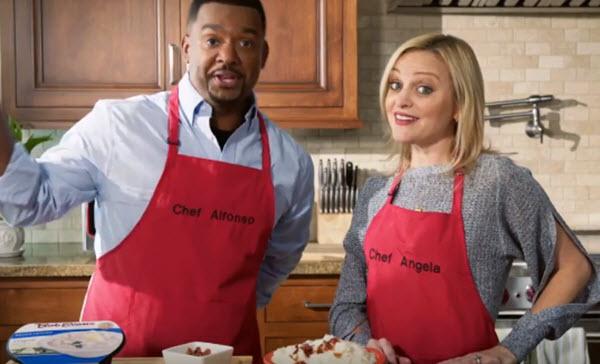 Packaged side dishes do big business around the holidays, which obviously means that a lot of hosts aren’t making those dishes from scratch.

Now, for Thanksgiving, Bob Evans Farms is out to win over more of the holdouts, by convincing them that they really can make their lives easier — and spend more time enjoying their company — while still impressing those guests.

Today, the brand is launching a series of videos featuring television sitcom actor and “Dancing With the Stars” winner Alfonso Ribeiro and his wife Angela. The couple are shown demonstrating how simple it can be to make plain Bob Evans mashed potatoes “gourmet.”

How? By sprinkling bacon on top or, if you’re a bit more ambitious, drizzling some pesto over the premade potatoes.

To drive home the ease-of-prep theme, the “Step One: Done” videos range from just five seconds to 40 seconds in length. And the longer pesto version (below) consists of 15 seconds of drizzling followed by 25 seconds of Alfonso joking that the one-step process didn’t allow for enough time to show off his custom-made chef outfit.

“We hope our mashed potatoes can give you time to focus on what really matters: your guests and a flawless turkey,” summed up Chris Lambrix, the brand's senior vice president, retail business development, in the campaign launch release.

The videos, and other holiday recipes using Bob Evans dishes, are hosted on the Bob Evans Grocery site.

The campaign also includes a sweepstakes in which consumers can enter to win free Bob Evans Farms products for a year by sharing their favorite one-step mashed potato recipes on the Bob Evans Grocery Facebook account.

The videos and sweeps are being promoted with paid social media and public relations, including a media day in Los Angeles.

According to a recent survey of 1,500+ adults conducted for Bob Evans Farms by ORC International, more than one in three Americans use prepared sides — and 20% who serve them tell their guests that the dishes are homemade.

The survey also found that millennials and Gen X-ers are more likely to use prepared sides than other age groups (44% and 40%, respectively, of the two groups say they serve such dishes). In addition, some 41% of men, versus 31% of women, report using prepared sides.

“We’re seeing great growth in the category and in our business,” Thyme Hill, VP of marketing at Bob Evans Farms, tells Marketing Daily. “Over the past 12 months, more than a million new households bought Bob Evans refrigerated sides.”

According to IRI data, last year, the brand saw about a 27% increase in volume from October to November, confirming that consumers “are using our side dishes more frequently around the holidays,” Hill adds.