Reporters Are A Pain -- It's Their Job 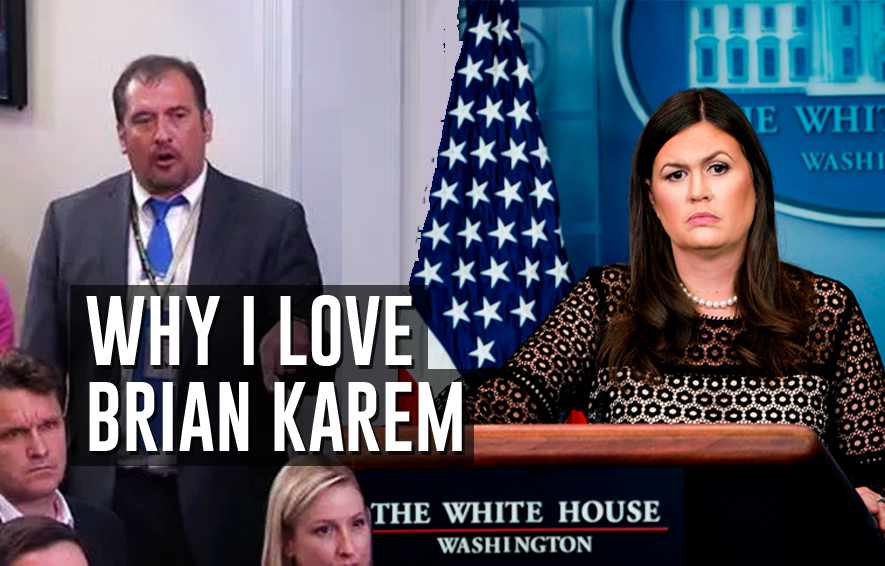 The thing is, no one was ever happy when Mike Wallace showed up with a crew from “60 Minutes.” Or when Woodward and Bernstein kept poking at people and facts to expose Watergate. Or in 1906, when Upton Sinclair exposed the conditions in Chicago’s meatpacking plants. Or when Seymour Hersh exposed the My Lai Massacre in 1969 in Vietnam.

Sometimes they save lives and provoke justice. Other times, they bring down the rich and powerful, toppling individuals and institutions hiding in darkness.

Journalists are paid to provoke. It’s their job. But it’s also who they are as individuals. The ones who do their job best can be irksome, tiresome, relentless individuals.

Which is why I love Brian Karem.

He worked for me back when I was the executive producer of Broadcast News Network, a regional news operation in New York.

And back then he was… provoking presidents. Before I met him, in 1992, he was covering an international drug summit in San Antonio, Texas, when he asked President Bush to comment on claims the summit was a “joke."

President Bush countered that the press should ask questions of the other presidents and not him. Karem persisted until Bush allowed Karem to ask his question to Mexican President Carlos Salinas de Gortari. Karem lost his job at KMOL over his aggressive style of questioning.

Now he’s covering the White House for Playboy, and writing about it for  Sentinel Newspapers, where he's executive editor.

Which is why when Karem writes about the CNN/Jim Acosta battle, it’s worth paying attention. Karem says Trump’s war with the press is just heating up.

"The temporary victory for the Free Press therefore is going to be short-lived if the president has his way” writes Karem.

United States District Court Judge Timothy Kelly said the process “is still so shrouded in mystery that the government could not tell me,” who made the decision to toss Acosta, Karem reports. But Acosta’s return is temporary, and the Judge said that “due process” must be upheld. And so the White House has set out to write rules to ban journalists, and those rules are forthcoming.

“People have to behave,” Trump later said in the Oval Office. “If they don’t listen to the rules and regulations, we’ll end up back in court and we will win.” Later, press secretary Sarah Huckabee Sanders said: "There must be decorum at the White House.”

And, reading some of the comments on CNN, at least some Trump loyalists agree that the press should be put on a short leash:

Judy Dostal wrote: "Bad behavior by the press is unacceptable.”

Helen Torres wrote: "Leave our President alone and let him do his job, that Acosta guy was disrespectful to our President he should be fired.”

Karen Pounds Gersna wrote: "He should have been removed.  You can ask a question, but not be an ass. Was asked to sit down and wouldn't hand over the mike.
Sorry he acted like a big ASS."

John Massey Show wrote: “Whow [sic] me where in the constitution it states the press get an all access unresticted [sic] pass to the white house, and press passes are an right. They are not, their[sic] a privilege."

Cindy Stevens wrote: "The press has been attacking him for a long time. President trumps turn to let them have it back. Give em hell president trump!!!!"

Juan Johnny Cruz wrote:  "If the press is disrespectful of the President, they should be removed and banned forever"

So this war on journalists is far from over. Trump will continue to use the label “fake news” to disparage any reporter or news organization that he doesn’t perceive as loyal and respectful.

It’s worth pointing out that even Fox News sided with CNN on the Acosta matter, filing an amicus brief with the court.

So here’s what comes next. The administration will draft administrative rules on what standards of “decorum” are, and how reporters can have their credentials removed. This has never happened before. It’s a new and disturbing step toward controlling the media.

Karem writes: "The president will draft a set of rules and will arbitrarily decide what is or is not rude. Using the nebulous definition of ‘decorum,’ these rules may or may not limit the number of questions reporters are allowed to ask, how they may address the president and his minions, who may or may not have access to press passes, who can or cannot cover the West Wing, as well as what is appropriate manner of dress, speech, conduct and other attitudes the president deems inappropriate."

And reporters, being human beings with families, mortgages, and bosses who need copy filed every day from the White House, will be under incredible pressure to dial it back. Point Trump.

Then someone will cross the line and ask a question deemed “rude.”

I’d put my money on Karem, because he knows  uncomfortable questions are the ones that matter. But Trump could ban the New York Times, CNN, or MSNBC, or the Associated Press or Reuters. He could ban reporter or a news organization — he’s writing the rules, so there’s no telling where he’ll draw the line.

Karem doesn’t mince words here, noting that what’s coming is profoundly dangerous. “We could also end up with a ruling [by the court on new White House rules] that backs the executive branch of government on both the First and Fifth Amendments — and that, my friends, would sound the end of our Democracy."

journalism, newspapers, politics
3 comments about "Reporters Are A Pain -- It's Their Job".
Check to receive email when comments are posted.
Read more comments >
Next story loading