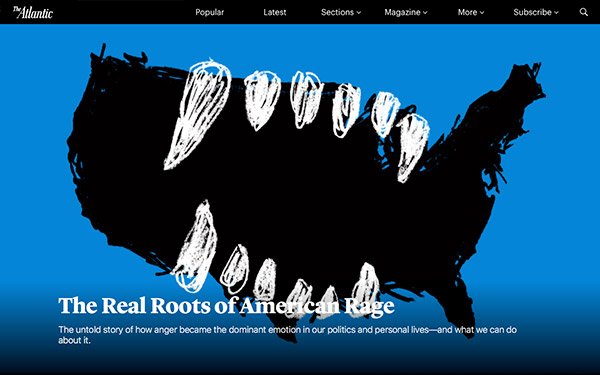 The cover of this week’s Atlantic magazine is hard to miss: a blaring shade of red, with sharp, scratching sketch marks depicting an angry face - the gaping mouth in the shape of the United States.

The cover story asks: “Why are we so angry?”

Penned by New York Times columnist, senior editor and author Charles Duhigg, the feature dives into what it calls “the untold story of how we all got so mad at one another, how dangerous our fury has become, and what we might do about it.”

Duhigg interviewed social scientists, political operatives, psychologists and protest organizers, among others, for The Atlantic story.

Duhigg makes the argument that our nation was founded on anger: “We are a country born of revolution. Combat — on battlefields, in newspapers, at the ballot box — has been with us from the start.”

But this nation’s anger has changed recently, he noted.

“The tenor of our anger has shifted. It has become less episodic and more persistent, a constant drumbeat in our lives. It is directed less often at people we know and more often at distant groups that are easy to demonize.”

The polarizing anger on both sides of the aisle cannot simply be blamed on the rhetoric coming from the White House, according to Duhigg. “Our predicament predates the current president,” he writes.

Instead, “a whole host of invisible forces have been steadily transforming a useful and episodic emotion into something much darker and more persistent.”

Duhigg has previously spoken about “hate-reading.”

In the last two years of the Times‘ coverage of the president, “the amount of anger in the news has boosted our traffic,” said Duhigg at the INMA’s November Consumer Engagement Summit last month, quoted in a Nieman Lab article.

“The trouble is the kind of arousal we most dislike when we can anticipate it is anger — the emotion news usually causes. If you say to somebody ‘Would you like to be angry?’ they will universally say no. Then they read something on Twitter that makes them outraged, they will share it and read it again and again.”

“We have to find other emotional rewards to deliver something sustainable,” Duhigg said.