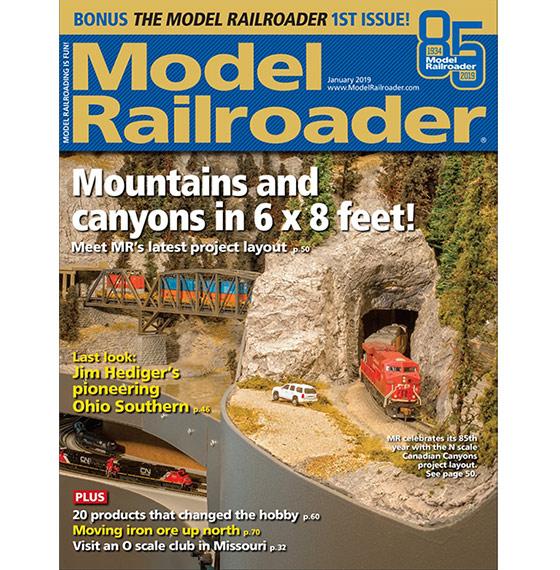 In celebration of 85 years since the launch of its flagship title Model Railroader, Kalmbach Media has released a special expanded edition of the hobbyist’ title, along with updates about their ecommerce business, content studio and other initiatives.

Model Railroader, launched in 1934 as a side business by Milwaukee commercial printer Al Kalmbach, reaches more than 200,000 consumers each month across print and digital content, video, books and special issues.

The anniversary issue includes several nods to Kalmbach’s legacy, including a step-by-step story on how to paint and weather a scale replica of Kalmbach’s original print shop. The model was a tie-in with Kalmbach Media’s ecommerce arm, which sold the structures as a limited-edition kit that quickly sold out.

The ecommerce site also features custom model railroading accessories and posters of vintage covers that tie in with the issue.

The issue includes a look at the original model trains owned by Kalmbach — many displayed in the company's current offices — and a round-up of the 20 innovations that have impacted model railroading, such as onboard electronic sounds, flexible tracking and 3-D printing.

Model Railroader reports that many of its regular advertisers signed on to do extra business across the anniversary issue. One promotion in particular attracted Bachmann, Walthers and MicroMark, all top names in the hobby industry, to take part in a sweepstakes promotion that included prizes from those sponsors.

Since its launch, the content studio has been working with clients to provide creative solutions to connect them with audiences, including custom publications and content channels across their sites.

The company’s ecommerce arm is its fastest-growing division. This year, Kalmbach Media anticipates “transitioning from linear marketing to more holistic relationship marketing that makes better use of customer data.” It will achieve this through the installation of a revamped marketing stack.

The company plans to expand its sub-box business and digital-only subscription offerings this year.

In totally, Kalmbach Media, which publishers other titles, such as Astronomy, Discover and Bead&Button, reaches more than 35 million consumers across 18 sites.

CEO Dan Hickey stated: “What you see with Kalmbach’s evolution over 85 years is a cycle of re-invention and transformation driven by our audiences, and their desire to experience passion for our brands in new and exciting ways. That’s not just Al Kalmbach’s legacy—keeping that cycle going is our future.”

The anniversary issue of Model Railroading is available now on newsstands and online through the Kalmbach Media’s Hobby Store.