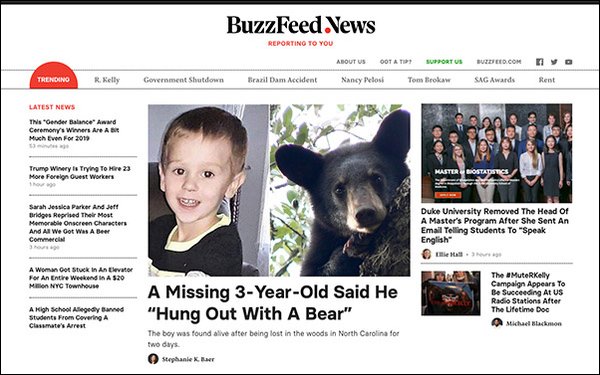 Last week, BuzzFeed announced it would cut 15% of its workforce as it restructured the company with an eye on profits. The fallout of that move is now clear: Major cuts to the national news, national security, entertainment and LGBT desks.

According to several reports, the three units were all dismantled in the wake of layoffs.

The national desk published its final story this morning.

Across other departments, the entertainment team at the company has been reduced to two employees and the LGBT desk is one staffer.

According to The New York Times, no jobs were lost across technology, politics or investigations teams.

Laid-off employees were offered a severance package of 10 weeks plus benefits through April.

However, BuzzFeed revealed it would not pay outgoing employees for owed paid time off. The company’s laid-off California employees will be compensated for PTO because state laws demand it.

In an open letter published on Medium over the weekend, addressed to BuzzFeed News EIC Ben Smith, BuzzFeed’s CEO Jonah Peretti and HR head Lenke Taylor,  BuzzFeed’s news staff council addressed the issue: “This is paid time that employees accrued by choosing not to take vacation days and instead do their work at BuzzFeed.

"Many of the employees who have been laid off had the most difficult jobs in terms of scheduling — such as the breaking and curation teams on BuzzFeed News who regularly worked weekends and holidays — or managers who weren’t able to use vacation time because they were expected to be available to their teams.”

The news staff council is a self-described “group of employees appointed to open up the lines of communication between News employees and company management.”

The BuzzFeed staff is not unionized, and CEO Peretti has publicly said he believes a move to unionize would not be right for the company.

More than 400 current and laid-off employees have signed the petition.

Since the letter was published, Taylor stated that the company wants to meet with its staff to discuss the issue.

According to a report by Tech Crunch, Taylor stated: “We would like to have a dialogue with the news staff council and staff from other departments on PTO payout. We are open to re-evaluating this decision, but we think it is important for everyone to understand the trade-offs in changing the PTO practice.

"How we came to the decision to offer everyone a minimum of 10 weeks salary, and the ways we’ve adjusted our severance to be fair and competitive in every state we operate.”