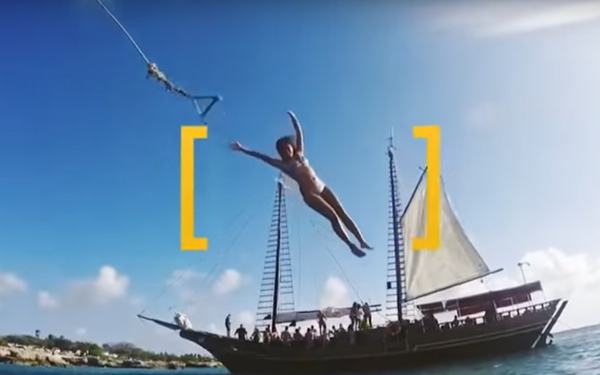 When you think about Super Bowl ads, what comes to mind is a one-off, larger-than-life spot that a brand uses to get a big hit before they return to their regular ad campaigns. However, that’s not how Yellow Tail Wine sees it.

For the third year in a row, the company debuted an ad during the Super Bowl that it plans to use in a much bigger way.

Last November, the wine brand kicked off a contest asking fans to submit a six-second video of what “happy” tastes like to them.

In the ad (shown below), the Grand Prize winner can be seen dancing the salsa on a beach, while the runner-up is seen swinging from a rope off a boat in Aruba during her honeymoon.

A Movement Rather Than a Campaign

Iain Douglas, CMO, Deutsch Family Wine & Spirits, the makers of Yellow Tail, sees “Tastes Like Happy” more as a movement about happiness than an ad campaign. “This year is different than the past years, where we were more about fun and using  mascots like the Roo and the Yellow Tail guy,” he noted.

Beyond the Super Bowl

The brand decided to extend the time and exposure for this campaign before and after the Super Bowl window.

Douglas added, “We changed the timing to bring our idea to life in our key selling season as well as continue it throughout the year. Through this marketing strategy, we are truly building a happiness movement, rewarding our wine and brand lovers, and giving them more chances to engage with us and with each other.”

The campaign’s focus was on incorporating user-generated content -- a marketing tactic it’s used before. However, this is the first time the brand has tried it on such a large scale.

This approach aligned with the overall brand focus. “Yellow Tail is a brand about people, and it’s their brand,” said Douglas. “We want to bring happiness to every table, so what better way than to let our customers share? We bring people together to celebrate and share happiness.”

This approach seems to be working well for Yellow Tail, which is the most followed wine brand on social media and the most popular imported wine brand in America, according to the company.

“We’re constantly -- and this year ever-increasingly -- engaging with consumers. In return, they are sharing videos, photos, and other great moments of happiness in their lives,” said Douglas.” We felt it was only natural to feature real fans in our new Super Bowl commercial.”

Connecting to the Customer Experience

Creating a positive customer experience is at or near the top of the list of priorities for marketers the world over. For Yellow Tail, “This campaign brings customer experience to life in a very real and relatable way,” said Douglas. “It’s all about the experiences that consumers have while enjoying [the] wine. Once you get the product right, it’s now about what happens .. all around the glass... the people,  setting, and conversations that are all part of simply living life.”

The brand has provided many lessons here. First, ads shouldn’t just be planned for one big event like the Super Bowl, but for a larger purpose that extends the value of the message they deliver. Second, the theme of the campaign should be something that adds to the larger set of values the brand represents, connecting on an emotional level with the audience. Finally, by encouraging this emotional connection, it’s easier to get the audience to provide beneficial user-generated content that amplifies an overarching campaign theme.