'The Dodo' Expands Into Children's Programming With 'Dodo Kids' 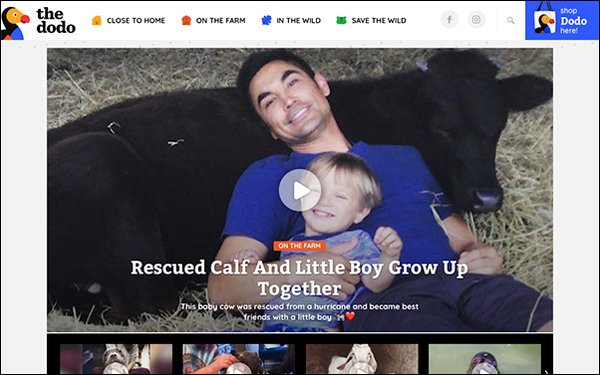 Group Nine Media’s animal-focused digital brand The Dodo is expanding into children’s programming with the launch of a new division, called "Dodo Kids."

Dodo Kids will develop episodic animal video content aimed at children 11 and younger. It will first focus on video for YouTube, starting in the spring. OTT distribution will come next.

Given YouTube's recent rule tightening around comments on videos featuring children — as part of a larger effort to make the online platform a safer environment for kids — Publishers Daily asked The Dodo how it will ensure a brand-safe environment with its new venture.

“Dodo Kids has always focused on positivity. Every piece of content we produce will be brand-safe, so the environments we can directly control will be fully brand-safe,” YuJung Kim, president of The Dodo, told Publishers Daily. “In a broader platform environment, such as YouTube, advertisers have the option of partnering directly with brand-safe channels, such as ours, to ensure complete brand safety.”

According to a 2018 PEW Research Center study cited by The Dodo, 81% of parents with children 11 or younger said their kids watch videos on YouTube.

“There is an undeniable bond between children and animals. Dodo Kids will tap into that connection to bring inspiring and entertaining stories to the next generation of animal lovers,” stated The Dodo’s founder-Chief Creative Officer Izzie Lerer.

The Dodo reaches 75 million parents monthly, she added. Looking ahead, The Dodo also has plans to expand Dodo Kids into merchandising and book publishing.

The publisher will hire a two-person team dedicated to this new division, including a story editor and video editor, who will report to Ameena Schelling, The Dodo’s editorial director.