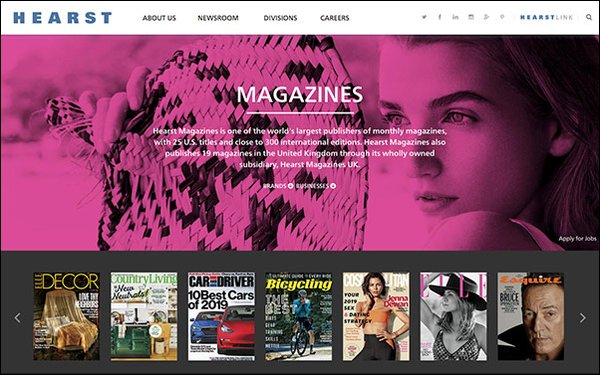 Hearst Magazines is opening a studio in California to expand its video development and production.

Located at the Santa Monica Airport, the space is 20,000 square feet and “will serve as a creative hub" for Hearst Originals and Hearst Magazines’ video production unit, according to the publisher.

It will also be a home for Clevver, the network of pop-culture YouTube news channels Hearst acquired this month from Defy Media, which shut down in November.

Hearst Magazines will use the studio for photo shoots and video production across its portfolio of media brands, including Cosmopolitan, Elle, Esquire and Harper’s Bazaar.

The announcement was made by Hearst Magazines President Troy Young.

“A robust presence on the West Coast is a natural next step for us as we continue to expand our creative capabilities and deepen our talent pool,” Young stated. “Video has been a consistent growth driver for us, and this studio will further enhance the quality and quantity of our entertainment offerings.”

In the Magazine Media 360° Brand Audience Report for October 2018, about half of the 112 titles with the most video growth year-over-year were Hearst brands.

That is thanks, in part, to a concerted effort to build audiences on YouTube since the summer of 2017, as well as Hearst Magazines’ brands integrating more video into editorial initiatives.

The company developed a slate of series across three brands in particular: Harper’s Bazaar, Elle and Seventeen.

The West Coast expansion “represents Hearst Magazines’ increased focus on developing, creating and distributing video programming,” according to the company.

Hearst Magazines produces original television series like “Ready, Set, Pet,” which airs on the CW Network, and episodic digital series, including Cosmopolitan’s “This Is How I Made It” and Harper Bazaar’s “Go to Bed With Me.”

Hearst Magazines claims to reach a combined audience of 146 million readers and site visitors each month, publishing more than 25 brands in the U.S.