The Marshall Project Launches 'News Inside' Publication For Prisons 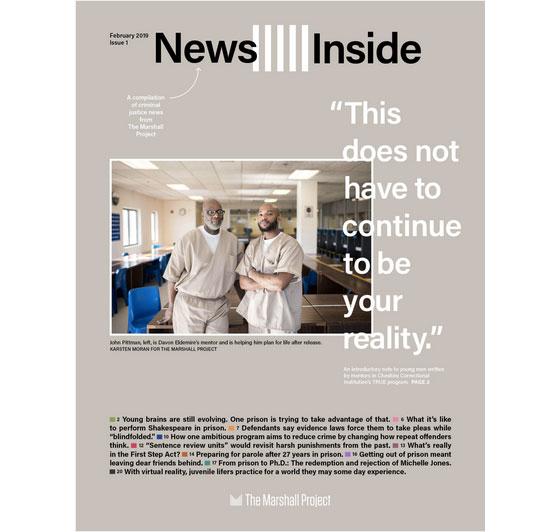 The Marshall Project, the nonprofit covering criminal justice in America, has launched a print publication about “incarcerated lives" for distribution in prisons and jails.

Called News Inside,the publication is available in 30 jails and prisons in 19 states. The first issue is 22 pages, with no ads.

It was inspired by a Marshall Project series called “Life Inside,” featuring first-person essays from those who work or live in the criminal-justice system.

Lawrence Bartley was one of the inmates whose essay was published by The Marshall Project as part of the series. He detailed his experience leaving prison after being locked up for 27 years. He is now the producer of the News Inside initiative.

"I wanted to share our rich articles with my information-poor former community, particularly those who believe study is a chance for redemption, who sacrifice sleep and risk a misbehavior report to pore over textbooks under shaded lamps after lights-out, who struggle to find resources to expand their minds,” Bartley wrote in a post on The Marshall Project’s website announcing the new publication.

Stories in News Inside range from interviews with inmates in New York’s Sing Sing prison performing Shakespeare to the challenges of evidence laws for defendants.

Bartley described News Inside as a means of providing "credible information about the world of criminal justice - free of charge and free of hassles." Prisoners are not allowed access to the internet or daily newspapers from corrections officers, Bartley writes, and library selections “are sparse and access can be difficult.”

Bartley said he has “carefully curated a selection of articles I hope will inspire thought and discussion without disturbing the peace.” (Prison administrators prohibit material "they believe could be inflammatory or stir unrest," he noted.)

The goal, according to Bartley, is for News Inside "to be distributed throughout all 50 states.”

The Marshall Project is fundraising to expand the program.

“Over the years, I watched many friends go home. I always felt a surge of jealousy, followed by a wave of guilt, accompanied by a hope that the departing friends would not forget me. Maybe they would send a letter, photos, food packages or something to make us smile, to show they cared," Bartley wrote. "Now that I have been released, News Inside is my way of not forgetting.”

Earlier this week, The Marshall Project announced Susan Chira would serve as its new editor-in-chief, succeeding founding editor Bill Keller. Both Chira and Keller came from The New York Times; Chira spent four decades there, most recently as senior correspondent and editor focusing on gender issues.