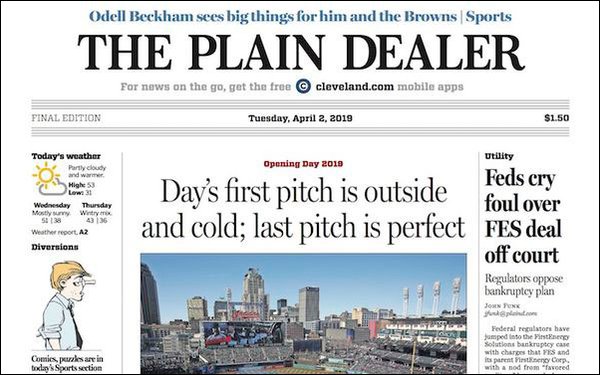 Cleveland Plain Dealer has let go of 14 people — about a third of its staff — as it moves to outsource production jobs to a subsidiary of Advance Publications, the paper’s parent company.

Another journalist will leave later this month.

Cuts were blamed on the continuing decline in advertising revenue.

The layoffs may not come as a surprise — Ohio’s largest newspaper announced back in December that it would have to undergo staff cuts to ultimately eliminate 22 production jobs.

In addition to this week’s cuts — mostly reporters at the newspaper’s unionized staff — the newspaper will lose around 35 employees.

Northeast Ohio Newspaper Guild, which represents staff at the Cleveland Plain Dealer, announced Monday that at least some of the 14 journalists who are leaving volunteered to be laid off in order to preserve jobs for their colleagues.

Many of those journalists had been with the newspaper for over 30 years.

Two decades ago, the Cleveland Plain Dealer had 340 journalists. It will soon be down to 33.

“We lost talented colleagues and the community lost important voices,” Ginger Christ, Plain Dealer News Guild unit chair, stated. “The damage isn’t just the loss of jobs. It’s the loss of information vital to the life of the city.”

Nationwide, more than 2,400 media jobs have been cut this year.

Christ has created a GoFundMe page, in an effort “to protect local journalism and to help our members who face layoffs. ”As of Tuesday afternoon, the page had raised nearly $5,000 of its $10,000 goal, with contributions from over 100 people.

Plain Dealer president and editor George Rodrigue expressed “a sense of loss” from the round of layoffs, stating: “In the near future, we will be refocusing our efforts to invest in deeper coverage of key topics that are of high value to our community. We will be sharing more about those plans in the coming weeks.”

According to a statement from the Northeast Ohio Newspaper Guild, those let go will have the option of extended health-care benefits.

"This has been an incredibly challenging few months for our members, all of whom continued to produce excellent journalism amidst so much uncertainty and stress," stated Christ in the Guild statement.

"Fortunately, we were able to come to a deal that provides some benefit to everyone. That's because we have a union. Without the Guild, we wouldn't have had a seat at the table to advocate for our members."

Local news is in a state of crisis, and nonprofit organizations are taking note.

This week, the John S. and James L. Knight Foundation announced it was investing $6 million in three organizations. It is part of a $300 million, five-year initiative the Knight Foundation endorses. The aim is to help rebuild local news organizations and provide communities with the information they need to sustain a healthy democracy.
employment, newspapers, trends
Next story loading