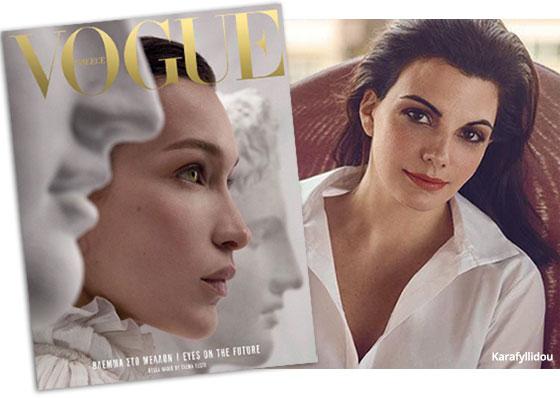 This week, Vogue returned to Greece after a seven-year absence as the Mediterranean country’s economy enters its third year of growth after bottoming in 2016.

The fashion magazine’s reappearance is a sign that it’s OK for Greeks to be glamorous again. Following the 2008 financial crisis, Greece went through a hellish eight-year recession that erased 25% of the country’s per capita output and drove up unemployment to 28%.

The latest incarnation of Vogue Greece aims to reach tech-savvy millennials with a strong focus on digital, social media and events.

“Dear Vogue Greece, welcome back again,” Anna Wintour, Vogue’s editor-in-chief since 1988, writes in the comeback edition that features model Bella Hadid on the cover. “Your return after years of absence fills us with joy.”

Natassa Bouterakou was named publisher of Vogue Greece last year. Conde Nast International licensed the title to media company Kathimerines Ekdoseis SA. A monthly edition of the fashion magazine will be distributed in the Sunday edition of its Kathimerini newspaper.

The relaunch marks the second time in about 20 years that Vogue has entered Greece.

Vogue Hellas originally appeared in 2000, published by Lyberis Publications, which also produced trend-setting titles such as Status, Life & Style and Glamour. Lyberis collapsed in 2012 amid a dearth of advertising as Greece’s economy shrank.

The latest incarnation of Vogue Greece aims to reach tech-savvy millennials with a strong focus on digital, social media and events.

Thaleia Karafyllidou, a native of Thessaloniki who’s getting a Ph.D in intellectual property law from the University of Manchester, is the editor-in-chief of Vogue Greece. At age 29, she’s the youngest editor-in-chief of a Vogue print title.

“We are bringing the Vogue brand back to the country in a new era where ‘luxury’ has been redefined,” she said in a profile of the new magazine. “It’s not just about a beautiful pair of shoes or a handbag — now ‘luxury’ is your free time and the time that you spend offline.”

Despite Greece’s economic woes, the country of about 11 million people has its share of wealthy people to fuel luxury spending. As of last year, Greece had about 66,000 millionaires, a population forecast to grow 6% to about 70,000 by 2023, according to the Knight Frank World Wealth Report.

Greece’s economy grew by 1.9% last year and its unemployment rate has fallen to 18%, which is high compared with the 6.5% rate for the European Union. The recovery is spurring interest from investors.

“I’m super optimistic about the Greek economy,” Joseph Oughourlian, founder of the $1.8 billion Amber Capital hedge fund, told Bloomberg. “It’s got all the catalysts in reverse, versus a lot of countries -- not just in Europe, in the rest of the world. It’s got populism receding, it has the economy in a very, very strong footing, it’s got incredibly strong fundamentals.”