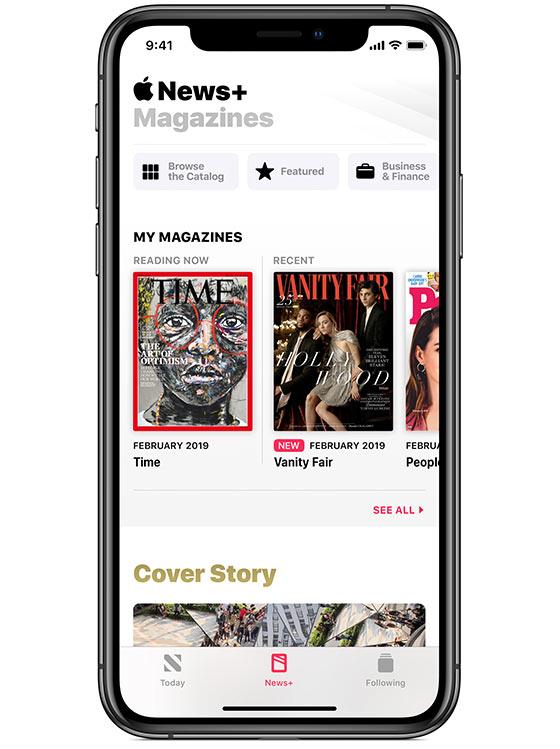 Apple’s digital magazine service signed up 200,000 subscribers in the first 48 hours as iPhone, iPad and Mac users responded to an offer for a free one-month trial, The New York Timesreported.

The number of readers who stick with the service once Apple starts billing them $9.99 a month ($12.99 in Canada) remains to be seen. However, that two-day subscriber number indicates Apple News+ quickly equaled the peak audience for the Texture.

Last year, Apple acquired the company -- which Condé Nast, Hearst Magazines, Meredith Corp., News Corp, Rogers Media, and Time Inc. had started in 2012 as a joint venture called Next Issue Media -- the basis for its “Netflix for magazines.”

Unlike Texture, Apple News+ now comes preinstalled on every new Apple device; it is available when existing customers update to its latest operating system. The update extends the reach of Apple News+ to hundreds of millions of devices in the United States and Canada. Apple will expand service to the United Kingdom and Australia later this year.

Her claim was exaggerated, considering that many people own more than one Apple device. Apple has 1.4 billion active devices worldwide, including 900 million iPhones, but millions of consumers in countries like China and Japan are missing out on Apple News+.

New York Times reporter Edmund Lee this week captured the publishing industry’s ambivalence toward Apple and the doubts about whether the tech giant is the savior many ailing publications seek.

The New Yorker’s website editor Michael Luo pleaded on Twitter that readers shouldn’t give up subscriptions that cost $7.50 a month after Reuters published a story that asked: “Is it time to dump your New Yorker subscription?”

He said Apple News+ only shows a portion of its archive; readers might miss out on reporting by Ronan Farrow, Jane Mayer and Doreen St. Félix. Also, the weekly crossword isn’t available on Apple’s digital newsstand. Heavens!

Publishers should be concerned about cannibalizing their readership from other sources. At the same time, Apple’s technology has the potential to make magazines more dynamic for advertisers and readers.

As magazines face unrelenting competition from social media companies like Facebook and the search giant Google, the Apple News Format may evolve to give magazines more features, such as embedded video and direct-to-consumer shopping.

Facebook, Google and Amazon have prioritized similar features for their various apps, websites and video-streaming services. Amazon is best-positioned to support ecommerce with its massive fulfillment network, while Google this week partnered with Walmart to provide voice-assisted grocery shopping.

Apple collects half of the subscription price and divides the remainder among publishers, based on how much time readers spend with their content. Streaming music services Spotify and Apple Music have a similar business model that pays record labels based on how often listeners request individual tracks.

That system means publishers need to weigh the opportunity costs of working with Apple and their own subscription marketing efforts. Developing a proprietary subscriber base gives publishers more data about their readers, including information that privacy-focused Apple won’t share.

The Wall Street Journal likely is hedging its bets on Apple News+ by adding 50 people to its newsroom as independent contractors. Those workers are restricted to 12-month terms, according to the union’s contract with the newspaper.

As digital publishers like BuzzFeed, Vice and Verizon Media shed workers, some of them may find a new home at the WSJ, at least temporarily.