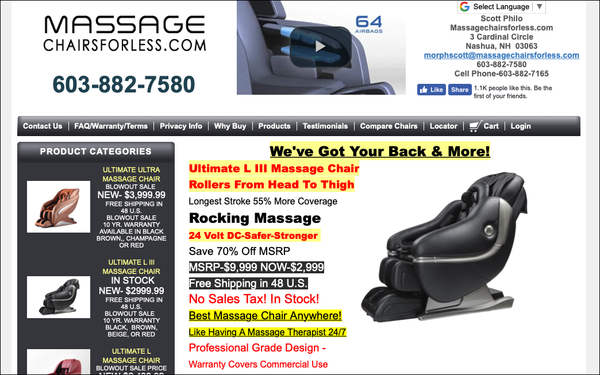 A Google advertiser who sells massage chairs is suing the company for allegedly overcharging him by more than $375,000 after he agreed to link his ad account to the Express platform.

Nashua, New Hampshire resident Scott Philo, owner of MassageChairsForLess.com, says in his complaint he had purchased pay-per-click ads on Google for “several years” prior to 2017. In the spring of 2017, Philo linked his existing ad account to Google Express, after a sales rep allegedly promised that Express would “integrate seamlessly” with the platform then called AdWords. (Google recently rebranded AdWords as Ads.)

Philo alleges he was told that Express and AdWords “mirrored each other,” and that cancelling a campaign on AdWords would result in cancellation of the same campaign on Express.

Philo says in his complaint that he realized in early 2018 that Google was now charging his credit card significantly more than before he linked his account to Express. When he complained to Google, he learned it had “created erroneous advertising” that resulted in unauthorized charges, he says.

Specifically, he says the Express app was incorrectly advertising a massage chair that had been discontinued. What's more, the chair was being advertised for $2,599.99 -- $600 more than he actually sold it for, according to the complaint.

“The Express application was premised upon completely useless advertising,” he alleges in a complaint that includes claims of breach of contract and fraud.

The lawsuit, filed last month in state court in Hillsborough Superior Court in New Hampshire, was transferred this week to U.S. District Court in Concord.

Google hasn't yet responded to MediaPost's request for comment.