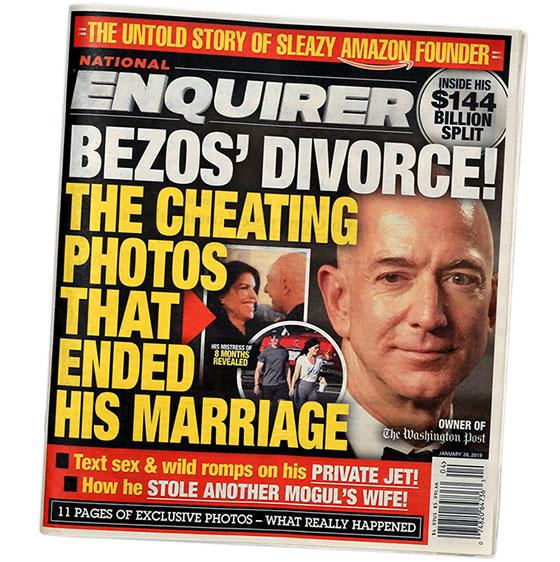 American Media Inc.’s sale of the National Enquirerfor $100 million to James Cohen, CEO of Hudson News, should be positive for the tabloid. Instead of writing about President Trump’s political enemies and praising allies like Saudi Arabia, the publication can get back to the business of covering celebrity gossip.

While the Enquirer broke the story about Amazon CEO Jeff Bezos’s love life, the ensuing publicity battle with the world’s richest man wasn’t worth the effort. Bezos may be wealthy, but he’s also boring, compared with Hollywood’s sex symbols who typically clutter the Enquirer’s pages.

The tabloid made Bezos, whose company has been blamed for destroying retail jobs and hollowing out formerly vibrant shopping districts like Manhattan, look more sympathetic than ever. He’s just a nerdy billionaire who wants to be left alone to seek taxpayer-subsidized helipads and other pork-barrel goodies from politicians.

An investigation into Bezos’ claims of extortion is ongoing and will continue to haunt AMI. Federal prosecutors in New York had planned to meet with Bezos this month about his claims that the Enquirer tried to blackmail him with help from Saudi Arabia, CBS reported last week.

Criminal complaints against AMI's executives are still a possibility.

Anthony Melchiorre, a hedge-fund manager whose firm controls AMI, wanted to unload the Enquirer after becoming disillusioned with its reporting tactics and the ensuing legal and political pressures, people familiar with the sale told the Financial Times.

Cohen, one of the biggest magazine distributors in the world, should make a nice fit for the Enquirer. The tabloid depends heavily on newsstand sales from stores like Hudson News and discount chains, such as Walmart.

The explosion in online gossip report has impacted the Enquirer’s circulation — from 6 million in the 1970s to less than 500,000 today, as reported by the Alliance for Audited Media.

While the Enquirer has stirred ample controversy over the years, new ownership may mean the tabloid will shy away from politically motivated “catch-and-kill” reporting. Cohen can clean house and hire new editors.

Last year, AMI reached a nonprosecution agreement with the Department of Justice to avoid getting busted for making a hush payment to Karen McDougal, a former Playboy model, to avoid damaging Trump’s presidential campaign.

The sale also means that AMI will cut its debt and focus on other publications, like US Weekly and In Touch.