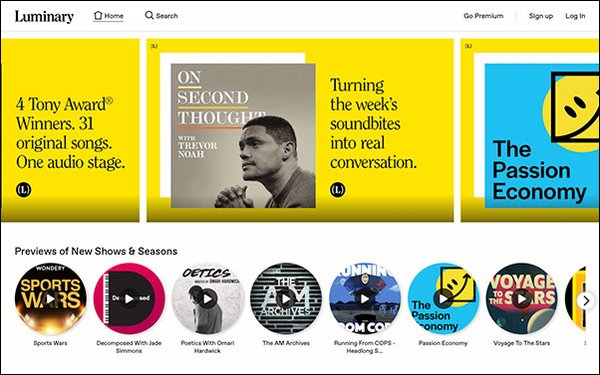 Luminary Media launched its new podcast streaming platform today, offering an ad-free experience with a slew of exclusive content for $7.99 a month.

A free version of the platform is also available, but users won’t have access to the new shows.

The platform features more than 40 exclusive podcasts, including shows from Trevor Noah, Lena Dunham, Leon Neyfakh and Hannibal Buressand, as well as access to popular shows like “Under the Skin” with Russell Brand, “IAMRAPAPORT,” “Love and Radio” and “Note to Self.”

However, a report from The Verge notes some of the medium’s most popular shows won’t appear on the platform, namely The New York Times' “The Daily” and Gimlet’s stable of shows including “Reply All” and “Homecoming.”

Verge writer Ashley Carman says the absence of these titles will make it more difficult for the platform to establish itself as a front runner in the podcast streaming game, particularly as advertising ramps up across the medium.

Spotify acquired Gimlet media earlier this year, along with podcast company Anchor FM, for around $337 million, as it establishes itself in the podcast sphere.

The Luminary app promises users a personalized listening experience after the platform has learned their personal listening style.

The Verge reports the platform is collecting an arsenal of data to better target its audience, including a toll that automatically transcribes podcasts and searches for “audio similarity.” These characteristics can then be used to compare shows and pinpoint others that might appeal to the same audience or to make programming and production decisions.

Luminary CEO-cofounder Matt Sacks told The Verge: “Our model has two different pieces to it: there’s existing shows that we’ve licensed, take Russell Brand’s podcast, for example, and there’s original shows that partners help us create, and so this data will inform both.”

The Luminary app is available for download on Apple and Android devices and through the Luminary website.