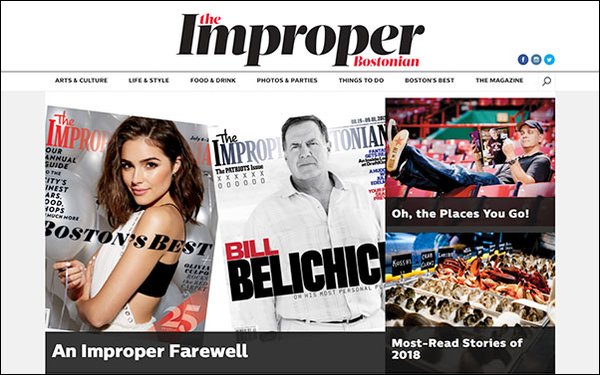 The Improper Bostonian, a lifestyle and arts magazine distributed for free from metallic boxes, closed down after a 28-year run. Publisher Wendy Semonian Eppich announced the closure a in a statement posted on the magazine’s website.

Editor Matt Martinelli said the magazine had been losing money and the Semonian family had looked for a buyer, The Boston Globe reported. Circulation had dropped to about 60,000 recently, from 87,500 four years ago.

The magazine had about two dozen full-time employees, including sales, marketing and editorial staff, and another dozen freelance contributors.

“It’s a family business, so it was a family decision” to close the semi-monthly magazine, Semonian said in an interview with the Globe. She also said some “very big names in Boston” had contacted her about bringing back the magazine in some form.

Her brother, Mark Semonian, started the magazine in a loft in Brookline Village, and reached an audience of more than 350,000 readers a year. Family patriarch Leon Semonian, a former broker at Smith Barney, financed the first issues when they were printed on newsprint.

The editorial voice was feisty and gossipy, with articles that included Catherine de Castelbajac’s steamy notes to her lover, billionaire Bill Koch. He later kicked her out of his condo at the Four Seasons.

Former radio host David Brudnoy ran a revealing interview with then-congressman Joe Kennedy II, and Chris Lydon, former host of “The Connection” on WBUR, opined that chef Julia Child was the preeminent feminist of her time.

The publication switched to an ad-heavy glossy that typically featured a smiling celebrity on the cover.

The Improper Bostonian had established plenty of good will, even among competitors who expressed their condolences.

“While it may be good in some sense for @DigBoston, I am not here to gloat,” tweeted Chris Faraone, editor of the alt weekly Dig Boston.

“It’s always a sad day to see a publication close its doors,” said Boston magazine editor Chris Vogel, “especially one that has been around for so long."

Perhaps The Improper Bostonian can find a deep-pocketed savior from Boston’s tech or finance communities, but the environment is challenging for local arts-and-culture publications.

The Village Voice, considered to be the first “alternative newsweekly” in the United States, was published for more than 60 years before ending its print run and going digital. It closed in August 2018.