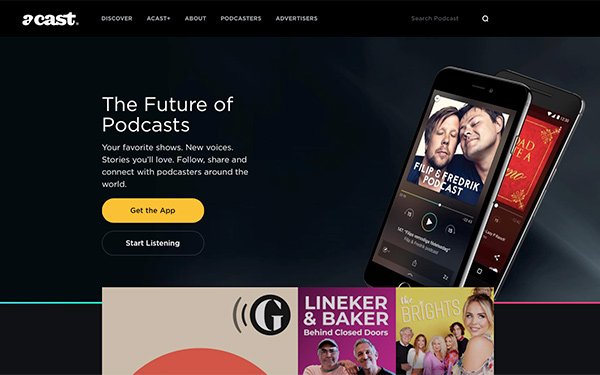 Podcast platform Luminary Media got off to a bumpy start last week. It launched without popular podcasts from The New York Times and Spotify — and soon saw other shows depart.

Luminary’s model depends on users subscribing to its platform to gain access to exclusive shows, though listeners can access a free version that allows access to thousands of podcasts.

But global podcast company Acast believes there’s another way to reach paying listeners: letting them access exclusive content on the podcast platform of their choice.

To that end, Acast launched a new product called Acast Access with partners Financial Times and The Economist, which are beta testing the platform. Acast Access works by allowing publishers to control and distribute their exclusive content in an organized and secure manner.

Acast Access creates different RSS codes for a podcast depending on what a publisher desires. One is a standard public-RSS feed, the other is a private version of the feed. The publisher can customize content from there.

This could mean creating a stream that gives a listener 15 free minutes of a popular show before asking them to pay. It could also mean allowing an already paying customer to access a popular podcast through their platform of choice, such as Apple Podcasts. The platform, most importantly, allows publishers to keep their paywall content safe, while allowing users to remain anonymous.

The company allows publishers to convert listeners who regularly access free content into paid subscribers. Prior to the launch of the new product, Acast learned one of its publishers that used Acast+, its podcast platform, could convert 50% of those listeners using the app into paying customers.

However, one of the elements that held many potential customers back was an inability to access a show on their preferred app.

Alastair Mackie, head of audio for commercial at the Financial Times, stated: “As we look to grow beyond our digital content, podcasting is a natural next step. The majority of our podcast listeners are not yet subscribers, and Acast Access will help us to bring tremendous value to the audio realm, incentivizing conversion for those listeners.”

Frank Andrejasich, associate director for The Economist Media Lab, said it is looking for ways to let paying subscribers “maximize the the value of a subscription payment.” Acast Access will help “us to take a more innovative approach to audio subscription and grow the opportunities for our podcasts.”

“We want to give our listeners as many reasons as possible to stay connected to The Economist,” Andrejasich stated.
pay wall, podcasts
Next story loading