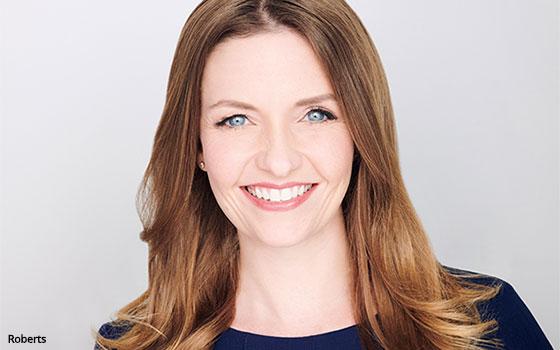 McClatchy has promoted Kristin Roberts to vice president of news. She is the first woman to hold the title in the company’s 162-year history.

Roberts will lead an expanded news group made up of the publisher’s 30 newsrooms and news operations across 14 states and McClatchy Studios, the company’s long-form audio and video documentary production unit. With Roberts' new role, McClatchy’s executive management team is evenly split male/female.

Roberts will continue to diversify the news operation to include more women and people of color, so that “our newsrooms reflect the communities we serve. I consider this an absolutely core task,” she said.

She will report to McClatchy president and CEO Craig Forman, beginning May 27. Tim Grieve, her predecessor, stepped down in November. “Her experience, vision and ingenuity will serve the company well as we accelerate our digital transformation,” Forman stated.

About a year ago, Forman created a regional structure of publishers and editors, divided into West, Central, Carolinas and East regions. Roberts will oversee this team of regional editors in her new position.

She directs coverage of the U.S. government, the Trump presidency and Congress, and leads collaboration on national projects across multiple newsrooms.

In her new role, Roberts will ensure newsrooms are “moving quickly and moving smartly,” and “identify what experiments are working” in each newsroom and bring those initiatives to other markets, she told Publishers Daily.

For example, a project called CuriousNC was created to ask readers and viewers what they want to know about the Carolinas and get answers from reporters.

Content from that project was “far more consumed… because we are giving [readers] exactly what they want,” Roberts said.

“The task is to take lessons we have learned and move fast, to make them exportable and push them out to similar markets and similar audiences," she said.

“It’s important to listen to readers and viewers and try new ways to meet their needs, publishing on new platforms,” Roberts said. Such attention can encourage audiences to become subscribers and support the local news business.

“We need to experiment at every newsroom, no matter the size,” she said, that’s crucial since local news is struggling. 1,800 newspapers have shuttered in the past 15 years.

Roberts was key in launching “Influencers and Priorities," an audience-focused initiative that asks influencers which issues in their state leadership should address. She is also leading "a cross-market, real-time sports initiative that will redefine McClatchy's approach to sports," according to the company.

McClatchy also announced it has expanded the leadership role of Scott Manuel, vice president of customer and product, adding McClatchy New Ventures Lab and partnerships with Google, Facebook, Twitter and Apple to his management portfolio.

Pergam will leave McClatchy on July 5 to join Facebook in a new role.