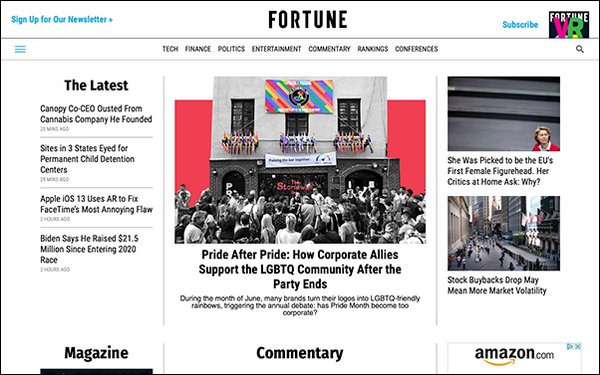 According to Fortune digital editor Andrew Nusca, everything on the site has been recoded. It is now faster to load on mobile and desktop.

Fortune worked with digital solutions company Alley on the rebuild.

Fortune redesigned its site in May 2018. It was the first major redesign to Fortune’s site in four years, when the site split from CNNMoney.com and its publisher Time Warner.

At the time of the redesign, the company's team of product managers, designers and engineers reworked many components of the site, including its article pages, photo galleries and feeds, Nusca wrote in a post announcing the changes.

Fortune debuted a template for long-form magazine feature stories, such as Jen Wieczner’s article on Mark Karpelès, the CEO of what was once the biggest Bitcoin exchange, for example.

The changes to the homepage in 2018 “largely caps our yearlong process,” Nusca wrote. The new design is more spacious and balanced, he noted, making it easier to “notice and discover new sections.”

The look is cleaner and more modern, making it easier to find sections such as “Commentary,” “Design” and “Luxury,” Nusca noted. Those new sections include “The Ledger,” dedicated to blockchain and cryptocurrency coverage, and “Humor,” for satire.

The magazine brand plans to add a paywall to its website, raise its cover price and host more conferences in the future, to reduce its reliance on print advertising.