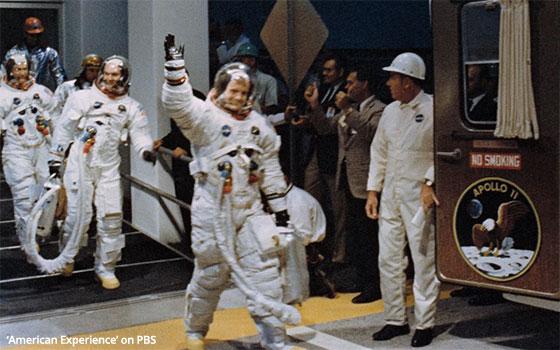 It is as if mankind peaked 50 years ago, and has never reached the same heights since.

TV this summer is marking the 50th anniversary of that peak moment -- the Apollo 11 moon landing (on July 20, 1969) and subsequent first steps on the moon -- with a slew of space shows.

Look for a sudden increase in the use of the always-popular lament, “If we can land men on the moon, then we should be able to [fill in blank with complicated problem mankind cannot solve, or ambitious plan we fail to carry out]!”

People have used variations of that phrase for years in the decades since the moon landing in ’69. This singular event has emerged as the go-to metaphor for mankind's ability to achieve great things.

But you never hear anyone refer to the TV business in this way. For example, no one ever says, “We can stream thousands of TV shows simultaneously at any given time … but we can't do X!” It's interesting, right?

Well, even if no one uses TV as a barometer for human technological progress, the TV biz is very capable of producing TV shows to commemorate great events, and produce such shows in mass quantities.

This is shaping up to be the case this summer as TV looks back to the 1960s and relives the moon landing, and the missions that led up to it.

ABC was perhaps the first on the 1969 bandwagon with its series of specials looking back at that year. ABC has already aired shows on Charlie Manson, Woodstock, Chappaquiddick and the 1960s protest movement. ABC's Apollo 11 show aired April 23.

ABC may have been first on the space bandwagon, but the programming starting this month is at least more timely. While space shows are likely to proliferate on numerous networks and platforms this summer, two networks -- PBS and National Geographic -- seem to have a jump on the competition.

Or at least that is the impression formed by the very-visible on-air promotion their space shows have been getting recently. Message to PBS and NatGeo marketing departments: Messages received; job well done.

PBS's celebration of space will even encompass “Antiques Roadshow.” The venerable appraisal program will have an all space-themed episode next Monday night (July 8) featuring segments seen on past shows over the years in which ordinary people brought space-program collectibles for the show's experts to assess. The episode is subtitled “Out of This World.”

PBS's other space shows -- packaged as “PBS Summer of Space 2019” -- include “American Experience: Chasing the Moon,” a six-hour, three-part documentary about the space program (July 8-10); “8 Days: To the Moon and Back,” a documentary solely about the Apollo 11 moon mission (July 17); “Ancient Skies,” about early astronomical science (Wednesdays, July 24 to August 7); “Nova: The Planets” (Wednesdays, July 24 to August 21); and “Nova: Back to the Moon” (Wednesday, July 10).

Meanwhile, NatGeo has at least nine space-themed shows airing next week packaged as “Space Week.” Leading off the week on Sunday night is a new two-hour documentary titled “Apollo: Missions to the Moon,” about the entire Apollo space program.

“The film features newly transferred film and never-before-heard audio to recount the groundbreaking, key moments of America’s goal to land on the moon before 1970,” NatGeo says. “With no narration nor modern-day talking heads, the missions are experienced entirely through archival TV footage, never-before-heard radio broadcasts, home movies, NASA film and mission-control audio to create an eyewitness-like experience.” The film was directed by award-winning documentarian Tom Jennings.

NatGeo's press release declares that this event -- specifically the first moon landing by Apollo 11 in July 1969 -- “changed the world forever.”

Well, perhaps the jury is still out on that. But at least the first moon landing gave us a high standard of achievement to shoot for, and a handy catchphrase to use every time we fall short of it.