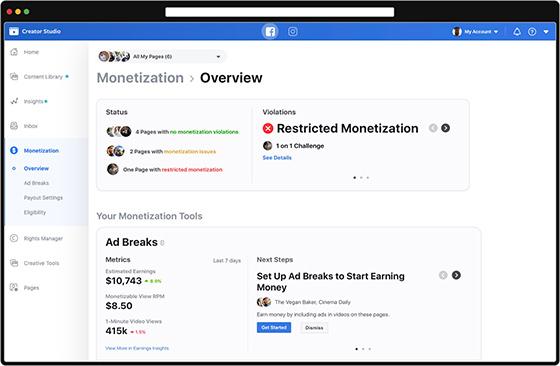 That includes “ad breaks,” which come in three formats: mid-roll shown during the video; pre-roll before the video; and a non-interruptive image ad that shows below the video without stopping it.

Facebook says the most suitable ad break formats will be automatically chosen based on the user and type of video content viewed.

Ad breaks have been a big hit for Facebook. In fact, pages using ad format have increased by more than 300% over the past year.

Facebook is also adding performance insights to its Brand Collabs Manager so creators and brands can better track how their branded content posts are performing.

This comes about a year after Facebook debuted Brand Collabs Manager to make it easier for advertisers find creators for branded content partnerships.

In addition, Facebook is rolling out the ability for creators to share their audience with advertisers for ads targeting, while allowing business partners to target ads featuring a particular post to the creator’s followers.

This change is expected to provide creators with a more secure way to share their audience with business partners.

Going forward, Facebook will also let creators offer supporter-only “Groups” as a “fan-subscription” benefit. That way, their supporters can interact with creators and each other in a private space.

In testing, Facebook said it has been encouraged by the feature's potential to help fans form deeper communities and stronger bonds with creators.