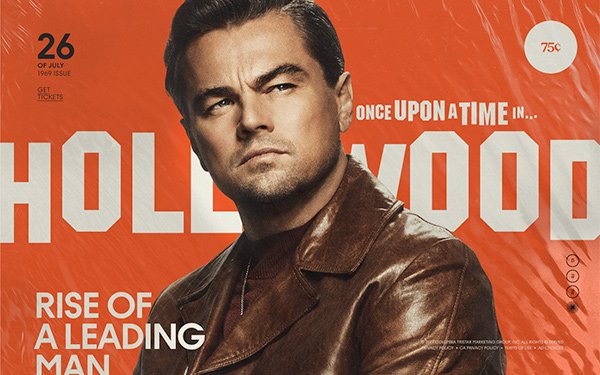 Anyone who feels nostalgic for the Hollywood era that movie director Quentin Tarantino meticulously captures in “Once Upon a Time…in Hollywood” can feed that sentiment with an online magazine created to promote the film.

Columbia Tristar Marketing Group Inc., a promotions unit of Sony Pictures Entertainment Inc., created the website to resemble fan mags from the late 1960s, when the movie is set.

The online publication, also titled “Once Upon a Time…in Hollywood,” is a slickly produced gateway to the world of the movie’s main character Rick Dalton, a Western-style actor played by Leonardo DiCaprio.

“These pages step back into 1969, the year "Easy Rider" and "The Wild Bunch" were released, the year of Woodstock and the moon landing, a year of peace, love, tragedy and war,” Tarantino writes in his brief editor’s letter.

The faux magazine features a profile of Dalton, the star of the fictional TV Western series “Bounty Law,” who is “looking to break out of the television mold.” Dalton is fresh off of a press run for “The Fourteen Fists of McCluskey,” which features the actor wielding a giant Nazi-killing flamethrower.

Another profile offers a more complete back story for Cliff Booth, Dalton’s stunt double, played by Brad Pitt. He describes how his service as a Green Beret prepared him for a career as a Hollywood stunt man.

Red Apple Cigarettes, a fictional brand that appears in the movie, is among the sponsors of the magazine. Its print ad hearkens back to a time when tobacco companies could claim: “There’s a reason why 4 out of every 5 doctors recommends Red Apple.”

There is also a music review section that features songs from the movie’s soundtrack — always a key part of Tarantino’s films. The director permanently formed an association in the cultural consciousness between a torture scene in “Reservoir Dogs” and “Stuck in the Middle with You” by Stealers Wheel.

It’s unclear how much the fake magazine has helped promote “Once Upon a Time…in Hollywood,” but the movie did rake in $41 million at the box office during its U.S. opening weekend. That exceeded Sony’s estimates of $30 million and the $38 million for Tarantino’s World War II action film “Inglourious Basterds.”