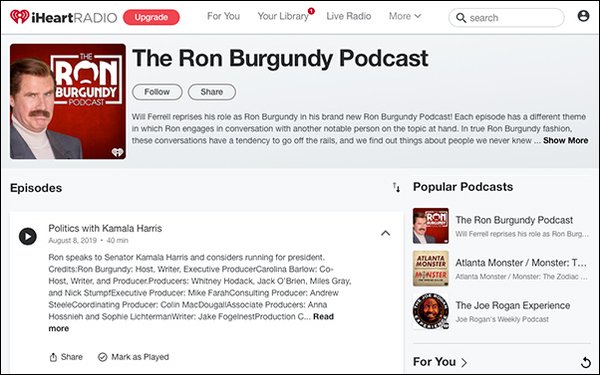 As it continues to invest in its podcast offerings, iHeartMedia is expanding its “Podcast, Meet Broadcast” initiative with its new “Sunday Night Podcasts” programming.

The first show debuted last night as Season Two, Episode One of “The Ron Burgundy Podcast,” broadcast on iHeartMedia's 270 stations across genres that include country rock, urban, hot AC and news/talk.

The program will introduce the most popular podcasts from the iHeartPodcast network to millions of new listeners.

Other upcoming podcasts include “Stuff You Should Know,” "Ridiculous History," "Atlanta Monster," "Stuff You Missed in History Class" and "Whine Down with Jana Kramer."

Conal Byrne, president of the iHeartPodcast Network, stated: “iHeartMedia reaches 91% of the U.S. population with just our broadcast radio stations alone, so we’re uniquely able to provide the scale critical to introducing podcasts to the millions of Americans who aren’t yet familiar with them.”

“Research shows that more than two-thirds of the population still are not dedicated podcast listeners -- many have never even heard a podcast before -- and "Sunday Night Podcasts" will help introduce different audio series from a variety of genres to a whole new audience.”

The “Podcast, Meet Broadcast” strategy was introduced in 2017. Mark Ramsey’s “Inside Psycho” was aired in more than 70 news/talk stations in the U.S.

Past efforts across the "Podcast, Meet Broadcast” include the true-crime podcast “Disgraceland” across more than 70 classic-rock broadcast radio stations this year. Following the broadcast, more than double the amount of the podcast’s typical downloads were recorded in one week.

iHeardMedia has also broadcast episodes of “Family Secrets” and “Monster: The Zodiac Killer” before they were available elsewhere.

In this vein, Anna Faris’ podcast “Anna Faris is Unqualified” also aired across top 40 broadcast radio stations and the iHeartPodcast Network after the company struck an agreement with the actor and Unqualified Media.

In a separate effort to expand its audience reach, iHeartMedia will translate six of its most popular podcasts in Spanish, Hindi, Portuguese, French, German and more.

The move marks the company’s move into international markets through native languages.

Podcasts slated to be translated include “Stuff You Should Know,” “Stuff You Missed in History Class,” “Stuff Mom Never Told You,” “Stuff to Blow Your Mind,” “BrainStuff” and “TechStuff.”

In a separate statement, Byrne said the goal was to “deliver exceptional content to listeners anywhere and everywhere they are, in the way they’d like to hear it. By expanding some of our most popular podcast content into new languages, we see a major opportunity to introduce podcast listening at scale to whole new audiences abroad."

iHeartMedia acquired HowStuffWorks and other Stuff Media brands in 2018.