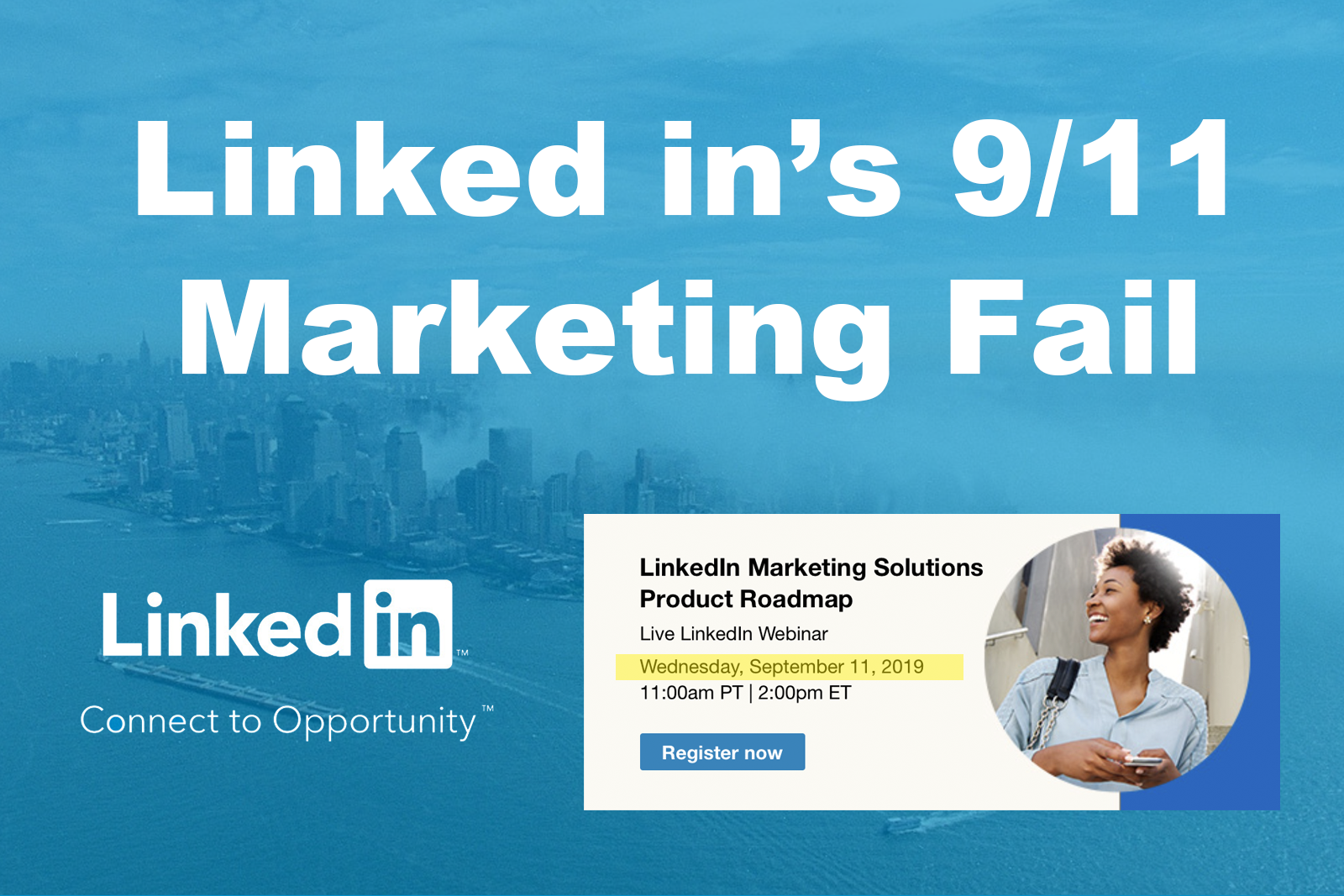 Because that day is now caught in a strange and painful limbo. It’s not a national holiday. It’s not officially part of any memorial or remembrance. And yet, it’s a day that requires something --  at the very least, silence from the marketing world.

Which is why the email from LinkedIn caught me by surprise.

"Hi Steven, You're invited to get an exclusive look at upcoming product and feature releases from LinkedIn Marketing Solutions. Join us on September 11th for a live webinar where we'll walk you through upcoming product features and how to use them to achieve your marketing goals."

Really? Did someone in marketing look at the calendar and say “Well, we can’t do the 10th, or the 12th, so what about Sept. 11? That seems like a day when customers will be excited to hear about New LinkedIn features.”

I reached out to Desai and asked him if the choice of 9/11 was inadvertent or strategic. He responded via LinkedIn a few hours later but didn’t answer the question, instead directing me to someone in PR.

Brands have in the past used the hashtag #NeverForget and patriotic images as a way to connect with 9/11. Among them, Harley-Davidson, Macy’s, Real Simple, Cosmopolitan, and Southwest Airlines all got criticized for their use of the tag in 2015. But by 2018, everyone seemed to have gotten the memo.

Which is why the LinkedIn webinar is all the more puzzling.

My outreach to Desai was pretty straightforward. "I'm wondering what kind of team conversations there was about that date, and if it would impact any sensitivities or issues given the somber nature of the day,” I wrote.

His response still left me somewhat stunned. "Hi Steven - Thanks for your note. Can you reach out to Fred Han, on our PR team? He'll be able to talk to this more: fhan@linkedin.com"

A quick search of my name on Google would tell you that I have a long history writing about and making films about 9/11 and its aftermath. I even did a TED talk at the main conference on the topic back in 2012. So when I reach out to ask about Linkedin's use of 9/11 for marketing purposes, the question comes from an honest place, and not one that should be punted to PR.

As we approach the 18th anniversary of the attacks on the World Trade Center, I'm hopeful that most marketers and brands will steer clear of the date. It isn't a time to sell a product, or try and hitch a brand to a national tragedy. Instead, it's a good time for American's to think about how the country has changed in just two decades -- and what we've agreed to give up, as we try and balance security and freedom.

Update, 9.6.18:
LinkedIn's Arjun Desai reached out to me after this article was published with the following statement  "Hi Steven, thanks for bringing this to our attention. We've decided to change the event date to Wed, Sept 25.”
I wondered what had prompted the change and asked Desai. His response: "We'll let the decision speak for itself.”  So, unclear how the event was scheduled, or why the schedule was changed.
marketing
4 comments about "LinkedIn's 9/11 Marketing Fail".
Check to receive email when comments are posted.
Read more comments >
Next story loading