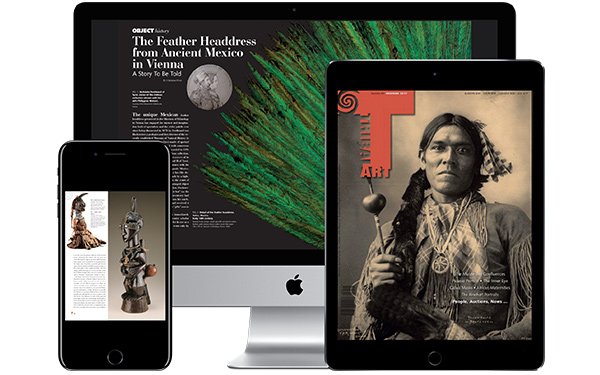 Exact Editions, a London-based company that digitizes the archives of periodicals, has partnered with Tribal Art magazine to digitize and offer subscriptions to its 15-year archive.

This comes a week after the company announced it was working with Dancing Times, one of the oldest monthly dance magazines, to do the same.

Individuals and institutions can access Tribal Art magazine’s archive online and on mobile. A subscription gives users access to both the archive and new issues.

Tribal Art magazine is devoted to the arts and culture of the traditional peoples of Africa, Oceania, Asia and the Americas. Each issue runs around 160 pages and contains articles from international scholars and specialists, reviews of exhibitions, interviews, histories of objects and collections and coverage of art market news.

Exact Editions’ platform lets subscribers search, browse and share the archived magazine’s content. Issues can be used as a research tool for students, artists, historians, authors and librarians, as well as for enthusiasts in the space.

In addition, Dancing Times digitized over 50 issues in collaboration with the producers, developers and designers at Exact Editions.

“The new digital archive offers us an opportunity to maximize revenue from institutional subscriptions, a market in which we are particularly keen to expand,” stated Dancing Times editor Jonathan Gray.

Individuals and institutions can subscribe to the last five years of the magazine's archive and new issues as they are published. Individuals can pay $11.99 quarterly or $40.99 a year.