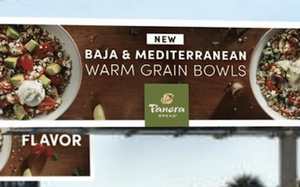 The launch is being supported by a campaign titled “Full of Good” across a broad swath of media.

The introduction of Baja and Mediterranean Grain Bowls, which can be ordered with or without chicken, is the next step in Panera’s evolving mission to offer more grains, plants and proteins to its menu, according to Chris Hollander, senior vice president of marketing.

A 30-second spot touts the flavor, texture and color of ingredients like brown rice and two types of quinoa, while noting, “This bowl is full of good. So you can be, too.”

The target audience for Grain Bowls “is a lot broader than a lot of our target audiences for other pieces of our business,” Hollander tells Marketing Daily. “Grain Bowls attract people of all ages, all demographics. Which is why you see such a wide array of media.”

The menu additions are the product of some two years of experimentation, Hollander says. “We tried 20 different varieties to get to this.”

But while Panera is ramping up on grains, vegetables and proteins, it’s not about to embrace plant-based meat substitutes. “For us, we tend to think that simple is better. When we think about some of the meat substitutes, sometimes they can be pretty highly processed and that’s not the place where we really want to play,” Hollander says.

National TV buys will be augmented by local spots purchased by some of Panera’s 1,100 franchise cafés, among the total of 2,100 cafés. Along with linear TV, spots will appear on streaming services like Hulu and Roku.

For out-of-home ads, “Wherever there’s a café, we worked with either the local franchisee or our local operator to find the proper billboards,” working in conjunction with Outdoor Nation, says Hollander.

Digital media in the “Full of Good” campaign include content partnerships with Tastemade’s Tiny Kitchen and athletics-focused The Players’ Tribune, which was founded by ex-New York Yankees star Derek Jeter. And, “we haven’t nailed down exactly which ones yet, but we’re talking to athletes who will tell about how something like Grain Bowls help in their daily habits,” Hollander says.

Campaign creative was handled by Anomaly, media by Publicis and publicity by Sloane & Company and Zeno Group.