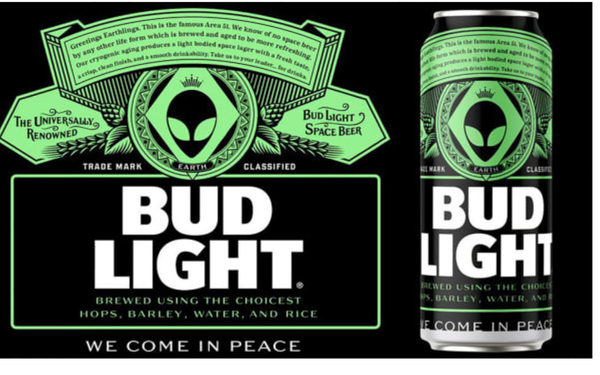 The organizer of “Storm Area 51: They Can’t Stop All of Us” is hoping that maybe he and Bud Light have stopped many of them.

Thousands of people are in tiny Rachel, Nevada, or on their way, to be part of the event, which started as a joke this summer on Facebook and ended up with more than 2 million people RSVPing that they were going.

But 21-year old Matty Roberts, who announced the totally facetious “Storm Area 51” on Facebook in July, has disavowed it and told people not to come on his website, even saying the event was a “possible humanitarian disaster in the works.”

The original, facetious idea was that people would storm through the protective gates at the Area 51 Air Force base to find out what’s what. By legend, the United States has studied UFOs and encountered aliens from outer space at the well-guarded base.

Roberts hoped folks were drawn to the more-official “Area 51 Celebration” in downtown Las Vegas on Thursday night. About 9,000 RSVPed to that  event, which had the  backing of Bud Light beer. “We Come In Peace,” its advertising for the celebration said.

The Anheuser-Busch brand also created some nifty UFO-themed green cans distributed to Nevada, Arizona and California, with a goony alien type on the front.

There’s also special merchandise -- and, as a gag, a locked Bud Light refrigerator on display at the Luxor hotel that can be opened by an alien being’s finger scan. And yes, at the Luxor there’s a casino VIP section reserved for aliens who have escaped from Area 51.

Arby’s has created some specially named sandwiches for this weekend, handing them out at a food truck near Area 51. Special items include the “Redacted on Rye Sandwich,” and the “E.T. Slider.” And to top it off, there’s the “Galaxy Shake.”

Back closer to where the UFOs are/could be, Storm Area 51 had turned into Alienstock, a name Roberts invented before the concert idea there blew up.

CNN reports that like all good Earthlings with marketing sense, Roberts has decided he wants to take his Alienstock idea on the road, offering a concert to any sponsor and city with a welcoming attitude about folks from outer space.

The Alienstock near Area 51 is now a loosely organized, unauthorized concert and gathering place for people  who either deeply believe in flying saucers, or conspiracy theories, or just firmly believe in having a potentially bizarre weekend in the desert near Rachel, Nevada (population 50), with some music involved. (Roberts officially retains the Alienstock name, and it’s the name of his website.)

On Twitter, where #Area51Storm is trending, one eyewitness reports there were a couple thousand of people there as of about 8 a.m. PST Friday.  Another post said about half of the people there are media.