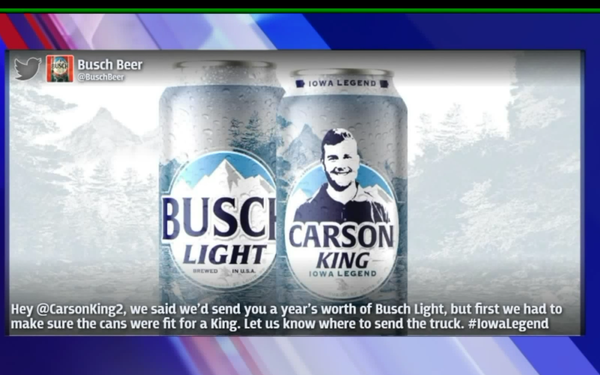 Sometimes marketing with the most innocent of intentions can blow up in a brand’s face.

Consider what happened when Anheuser-Busch tried to have some fun with Carson King, who’s a loyal Busch Light drinker but had never before been in the public eye.

Early in September, the 24-year-old King was at Iowa State’s ESPN  pre-game telecast when cameras caught a glimpse of the lighthearted plea he wrote on posterboard reading “Busch Light Beer Needs Replenished.”  Below that he wrote, “Venmo Carson King 25,” which meant he was asking viewers to donate to his “cause” to get beer money via the Venmo app, which lets people make payments via their phone.

As the dollars added up, he decided his little joke could serve a better purpose than beer money, so he turned it into an impromptu fundraiser for an Iowa children’s hospital. Busch Light and Venmo hopped aboard with their own contributions, raising the total to nearly $1 million.

And as King became a kind of statewide folk hero, Busch even created a special Carson King can, shown above (but just for King, not for distribution).

Then the wheels started to fall off.

The Des Moines Register profiled King, and a reporter discovered through ordinary research that when he was 16, King had authored a few racist tweets. He apologized, profusely, for something stupid he had done as a teenager, and said despite his mistakes, the fundraiser was doing a lot of good. He seemed sincere and penitent.

Then it was discovered the reporter had done something similar on social media. He received death threats and the paper was chastised for dredging up King’s  tweets. The reporter was fired.

Busch withdrew its association with King, because of “multiple social media posts that do not align with our values as a brand or as a company.”  (The beermaker always made clear it would honor its contribution to the hospital.)

In the process, Busch's 100-yard dash away from King angered Iowans -- because they were ready to forgive and forget.

“What’s happening with #CarsonKing is a prime example of our culture today.... constantly and intentionally looking for the bad when there’s so much good to share,” tweeted WHO-HD anchorwoman Jodi Long.  “Most of ya’ll better be glad social media wasn’t around when you were 16.”

Last week, organizers of Waterloo, Iowa’s Oktoberfest, announced it would not serve Busch Light at their upcoming event, in solidarity with King.

After Busch pulled out, several other local businesses stepped up with their own promotions and donations.

King, his reputation sullied for a brief moment, became a hero again. The Iowa governor proclaimed a Carson King day. He was honored at a University of Iowa football game. And on Monday night, hundreds of Iowans, including the governor, showed up at a benefit concert for the hospital, inspired by King’s experience.

As of Tuesday morning, $2.4 million had been donated to King’s Venmo account.