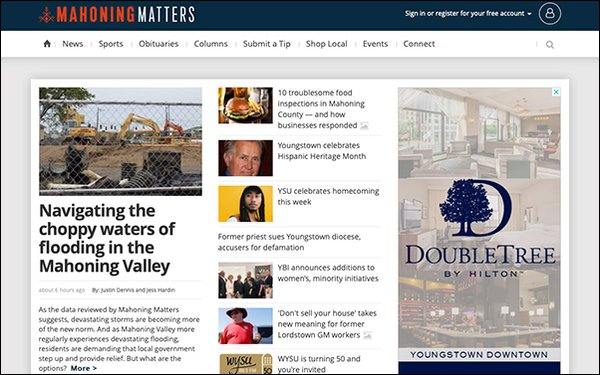 Following the news that Youngstown, Ohio's 150-old-paper The Vindicator would cease publication, Google News Initiative’s The Compass Experiment and McClatchy announced they would launch a digital-only news site to cover the area.

The name references the Mahoning Valley, located in northeast Ohio, where Youngstown and the news site’s extended coverage area is located.

Mahoning Matters’ staff is culled from the Vindicator, including EIC Mark Sweetwood, who served as managing editor at the shuttered publication for more than a decade. Journalists Justin Dennis, Jess Hardin and Jeremy Harper round out the staff.

The outlet plans to cover topics ranging from the local housing market to healthcare access to the effects of climate change on local homeowners. Mahoning Matters will also run obituaries and local sports scores.

"Our mission is to tell the local stories that aren't being told anywhere else in the Mahoning Valley,” Sweetwood stated. “We won't likely be chasing the latest crash that's on the noon news. Our goal is meaningful, original reporting about the people and topics that matter most to the Mahoning County area."

The launch was announced by The Compass Experiment’s general manager Mandy Jenkins. Two more digital-only local news sites are set to be announced over the next several months.

Jenkins stated: “The lessons we learn in the Mahoning Valley will be invaluable as we build our next sites — and hopefully will be applicable to the entire industry."

The Compass Experiment will span three years, with the intention of creating and sharing practices to create sustainable local news models.