'Slate' To Cover 2020 Political Issues With Reader-Funded 'Who Counts?' 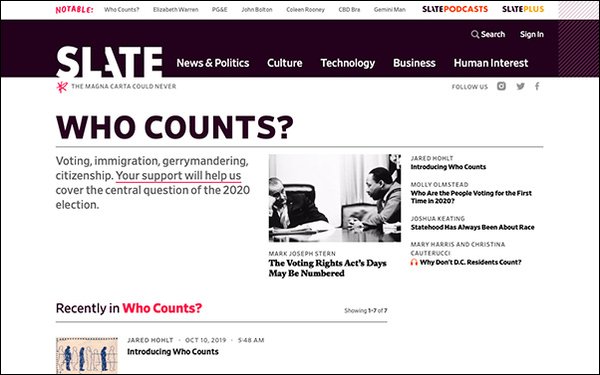 Slate is embarking on a reader-funded project that will surround its 2020 election coverage. “Who Counts” is a newsroom-wide effort to cover the upcoming election to determine who counts and who is excluded from representation in the United States.

“‘Who counts?’ is a question about representation, citizenship, and even asylum. A question about who gets to become an American and who gets to decide — and how we think about who deserves or earns the right to the designation,” Slate editor-in-chief Jared Hohlt writes in a post announcing the project.

Through digital, audio, tech and product development, Slate will focus on voting rights, as well as immigration, the Census, gerrymandering and representation. That is in addition to its coverage of campaigns and breaking political news.

The project will include different interactive maps, to inform readers on gerrymandering, voter ID laws, voter purgers and other voter-related issues in their area. Readers can put in their Zip codes to find out how much their vote is worth (1 Wisconsinite = X number of New Yorkers, for example).

Aviva Shen, a senior editor at Slate who helped lead “Who Counts,” told Publishers Daily the project is part of Slate’s efforts to continue to cover the 2020 election “thoughtfully and aggressively,” while keeping the idea of “who counts” in America and who doesn’t front and center for the next 13 months.

“We are recognizing this is an important theme, especially since 2016. We’ve been seeing a lack of trust in institutions on all sides of the aisle,” Shen said.

Slate will conduct interviews with separated families, first-time voters, lawyers and professors who have helped with gerrymandering efforts on the local level and those involved with statehood battles.

Other examples of the Slate-wide initiative include daily news podcast “What Next” focused on Washington, D.C. statehood, and an article from Mark Joseph Stern on the Supreme Court and the Voting Rights Act. A piece from Josh Keating looks at how statehood fights are really about race and partisanship.

Slate is urging its readers to support the initiative through a fundraising push. Readers can join its Slate Plus membership ($35 for the first year). It is also asking existing members to contribute to “Who Counts.”

Slate is also asking its members and readers to contribute story ideas and tips on under-reported issues, by sending them to a dedicated email address: whocounts@slate.com.

The news site is urging local journalists to work with them on local coverage, too.

"We need readers to be a part of this,” senior editor Dahlia Lithwick commented. “We don't know what's happening on the ground and we need to find out now."

Shen, referring to the crisis in local media as publishers shutter and spur massive job losses in the industry, added: “We want to invest in local journalists who are deeply embedded in these communities."