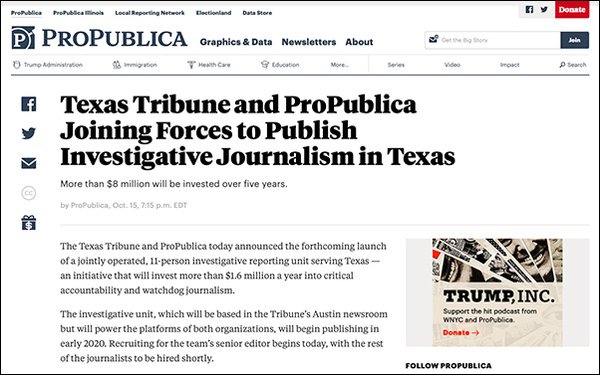 ProPublica and the Texas Tribune are joining forces to create a cobranded investigative unit focused on Texas. The 11-person unit will be based in the Tribune’s Austin newsroom.

Both news organizations will publish the team’s stories, beginning in early 2020.

“No state is more in need of watchdog reporting than Texas,” stated Evan Smith, the Tribune’s CEO. Teaming up with ProPublica "expands the limits of what’s possible and will serve the public interest in ways that make our state better.”

The investigative reporting initiative will be supported by an investment of more than $1.6 million a year.

Houston-based Arnold Ventures is supporting the unit with a five-year commitment of $5.75 million.

“Texas is a big state, and it needs big journalism to look under each cactus and behind every skyscraper,” stated Laura Arnold, cofounder of Arnold Ventures.

Recruiting for the team’s senior editor began today. The rest of the journalists will be hired shortly, according to the organizations.

“ProPublica is deeply committed to local as well as national reporting, and the stories and issues in Texas are among the nation’s most compelling,” stated Richard Tofel, president of ProPublica. “We’re confident the result will be more investigative journalism that spurs needed reforms.”

The Texas Tribune and ProPublica are both independent, nonprofit newsrooms. ProPublica produces investigative journalism, with local initiatives at over 20 news organizations around the country.