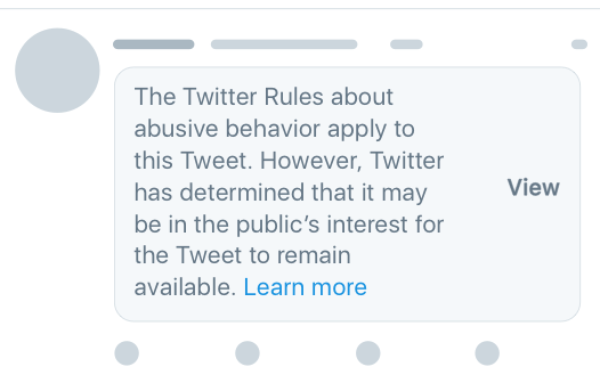 A week after Senator Elizabeth Warren outed Facebook's hypocrisy by placing a political ad that was clearly false (it stated that Mark Zuckerberg has endorsed the President's reelection), the role digital platforms play in disseminating false or harmful content from politicians is coming into greater focus.

While Facebook maintains it's okay for politicians to "lie" in their ads on Facebook, Twitter this week weighed in with an update to its policies for abusive behavior by "world leaders," but so far continues to do nothing about it.

"We want to make it clear today that the accounts of world leaders are not above our policies entirely," Twitter stated in a blog post updating its position, including the following scenarios that would result in "enforcement action for any account on our service (without consideration of the potential public interest value in allowing the Tweet to remain visible behind a notice):"

In other cases involving a world leader, we will err on the side of leaving the content up if there is a clear public interest in doing so.

Personally, I believe one world leader in particular has used Twitter to tweet things that qualify as terrorism (at least to stochastic kind) and threats of violence, but Twitter so far has neither blocked him, nor used its new disclaimer statement to qualify its belief that such tweets meet its standards for a clear public interest.

I think the truth is that Twitter continues to turn a blind eye -- much as Facebook continues to do with false political ads -- because it's in its own best interest. In the case of Facebook, it is mercenary: ad revenues. In the case of Twitter, it's a matter of staying relevant.

Sadly, the President's outrageous use of Twitter has made it relevant to people who otherwise wouldn't even give it a second thought.

While Facebook and Twitter are not alone in their reckless political content policies, they are two of the biggest influences for society. And the truth is they're putting their own interests ahead of that.

In June, we announced there may be times when the Tweets of world leaders that break our rules will remain on Twitter in the public interest. We’re providing more transparency and details around how these decisions are made.https://t.co/kbELAkOQcY