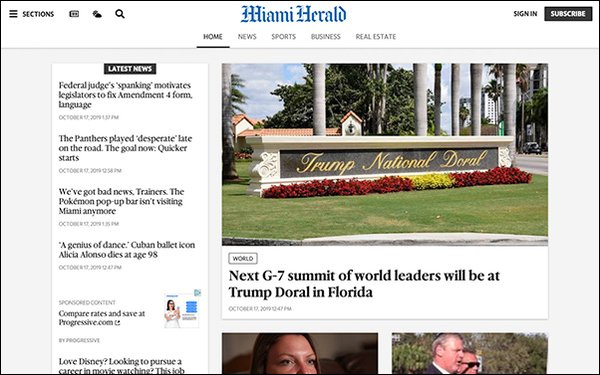 McClatchy’s Miami Herald is launching a fundraising campaign to expand its investigative reporting.

The goal for the Miami Herald Investigative Lab is to raise $1.5 million over three years. The lab will officially launch once it hits its first fundraising milestone of $500,000.

The lab will nearly double the size of the Herald’s current investigative team, with three additional full-time reporters, a videographer and an editor.

The Miami Herald’s investigative team, led by Julie K. Brown, was behind the three-part series “Perversion of Justice,” which uncovered the lenient plea deal given to serial sex trafficker Jeffrey Epstein. It led to a new indictment of Epstein and the resignation of U.S. Secretary of Labor, Alexander Acosta.

The lab will be created in partnership with nonprofit organization Miami Foundation.

“This relationship allows the investigative team at The Miami Herald to focus on the journalism that will expose corruption, identify fraud and seek solutions to problems that impact the quality of life in South Florida,” Aminda Marques Gonzalez, president, publisher and executive editor of The Miami Herald, wrote in a letter from the editor.

The Herald wants the lab to dig deeper into topics like local government corruption, fraud, exploitation of the vulnerable, environmental challenges and economic mobility.

Earlier this week,ProPublica and The Texas Tribune announced they were joining forces to create a cobranded investigative unit focused on Texas.

Separately, News Corp’s Storyful announced today the launch of an investigations unit and the expansion of its editorial team. Called “Investigations by Storyful,” the team will work in collaboration with newsrooms to develop exclusive stories throughout the 2020 presidential election cycle.

“As the race for the U.S. presidency heats up, it’s clear that mis- and disinformation on social media will continue to be a major hurdle for newsrooms covering the candidates and issues,” stated Storyful CEO Sharb Farjami.

Farjami added: “Helping our partners report verified facts and break stories is the core mission of the editorial team, and that is exactly why we are expanding the newsroom and strengthening our investigative services ahead of the 2020 U.S. election.”

Investigations by Storyful will offer three main services to newsrooms, including insights and analysis on breaking news, and analysis of communities, accounts and posts to understand the evolution of a story.

It will also provide network mapping, analyzing the people and groups driving conversations online, as well as the relationships between members of online communities and conversations.