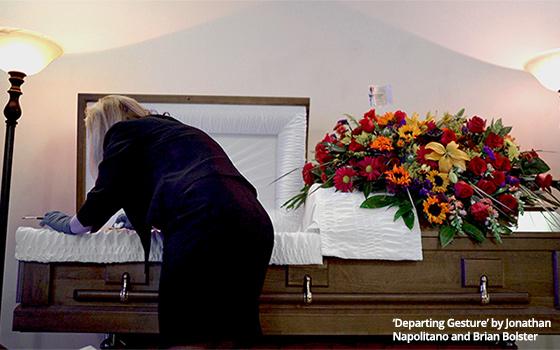 Following the publication of the short documentary “In the Absence,” which was named to DOC NYU’s 2019 Short List, The New Yorker launched a new series this week: “The New Yorker Documentary.”

The new video series features the work of both emerging and renowned filmmakers. The first in the series is “Departing Gesture,” a work directed by Jonathan Napolitano and Brian Bolster.

“Departing Gesture” is an 11-minute feature focused on Ridgeland, Mississippi, funeral director Trey Sebrell. Sebrell buries the unclaimed bodies of those who have died from complications due to HIV and AIDS. The film explores his work amid a culture of shame.

Three more films are set to debut as part of the series this fall.

“Lazarus” follows Malawian musician Lazaraus Chigwandali as he rises from street musician to global recording artist and human-rights activist. Directed by David Darg and produced by Bryn Mooser, the film explores Chigwandali’s work to bring attention to people with albinism.

The Amy Bench directed film “A Line Birds Cannot See” will debut at a later date. The film focuses on E.L., a young Guatemalan girl attempting to reunite with her mother in Houston after fleeing violence.

Finally, “The Last Conversation,” which is directed by The New Yorker’s Sara Joe Wolansky, will be published on The New Yorker site at a later date. The film is centered around the final conversation, accidentally recorded on their answering machine, between the Kornbergs, a couple married for 59 years.

“Departing Gesture” is available on The New Yorker’s website now.