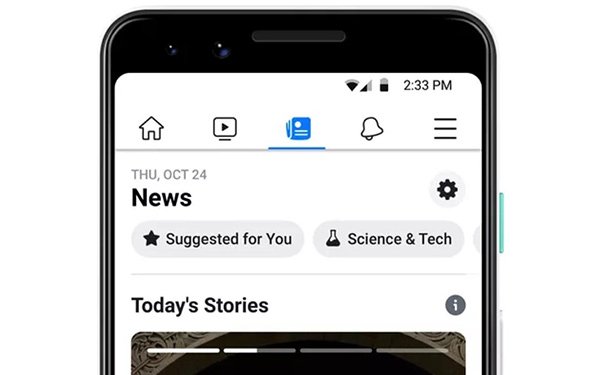 Still in its test phase, the just-launched Facebook News will serve as a destination for partner publishers, including The Wall Street Journal, BuzzFeed and USA Today.

If readers are receptive, the new service could challenge Apple’s News Plus offering — and represent a significant realigning of Facebook’s content priorities.

In exchange for their content, Facebook has r eportedly been offering publishers up to $3 million in annual licensing fees.

Yet, news organizations might be wary of working with Facebook after it rolled out a big news push years ago, only to later backtrack and drop the initiative. To address publishers’ concerns, Facebook executives are taking a highly collaborative approach to the new service.

“We talked to news organizations about what they’d like to see included in a news tab, how their stories should be presented and what analytics to provide,” Campbell Brown, vice president, global news partnerships, and Mona Sarantakos, news product manager, said in a company blog post.

For its part, Facebook has good reason to refocus on news.

Across platforms, consumers are more engaged with news content today than a couple of years ago, according to research from Verizon Media and Insights Now.

At the same time, many U.S. consumers have grown uncomfortable with the power that social-media giants possess as news gatekeepers.

In fact, a clear majority of Americans (62%) said social giants like Facebook have too much control over the news people see on their platforms, according to a recent report from the Pew Research Center.

Further, a majority of Americans (55%) told Pew he role social-media companies play in delivering the news on their platforms results in a worse mix of news.

On average, Republicans tend to be more negative than Democrats regarding the control that social-media companies have over the news, Pew found.

The team will have editorial independence and will select stories based on publicly available guidelines, available atz facebook.com/news

To be eligible for Facebook News, publishers have to be registered in its News Page Index, and abide by Facebook’s Publisher Guidelines.

Initially, the new service will only be available to a small percentage of Facebook users in the United States and be concentrated in larger metro areas, such as New York, Los Angeles, Chicago, Dallas-Fort Worth and Philadelphia.