'The Washington Post' To Publish Illustrated Book On Mueller Report 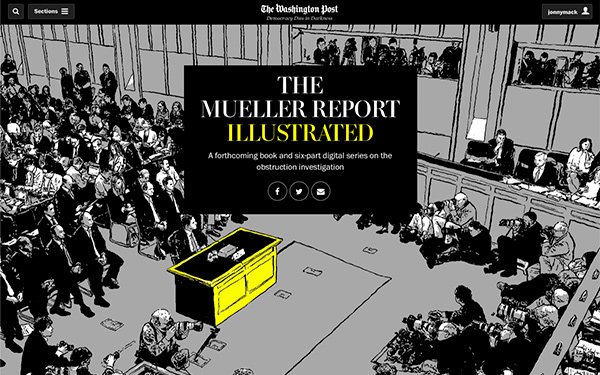 and book publisher Scribner are coming out with an illustrated paperback and ebook on the Mueller Report.

Out December 3, “The Mueller Report Illustrated: The Obstruction Investigation" is a graphic nonfiction book that aims to demystify the nearly 200-page volume II of Special Counsel Robert S. Mueller III’s report, which came out in April.

“This book helps to easily and clearly explain the underlying facts of the obstruction investigation, allowing the public to arrive at its own conclusions,” stated Martin Baron, executive editor of The Washington Post.

The book will examine whether President Trump obstructed the Russia investigation, accompanied by sworn congressional testimony and Washington Post reporting.

“The Mueller Report Illustrated” will cost $20.

The Washington Post and Scribner previously published “The Mueller Report” in February.

The ebook and paperback focus on the findings of the special counsel’s investigation into Russian interference in the 2016 election, with analysis from Post reporters.