Tech Vs. Trump: The State Of Play 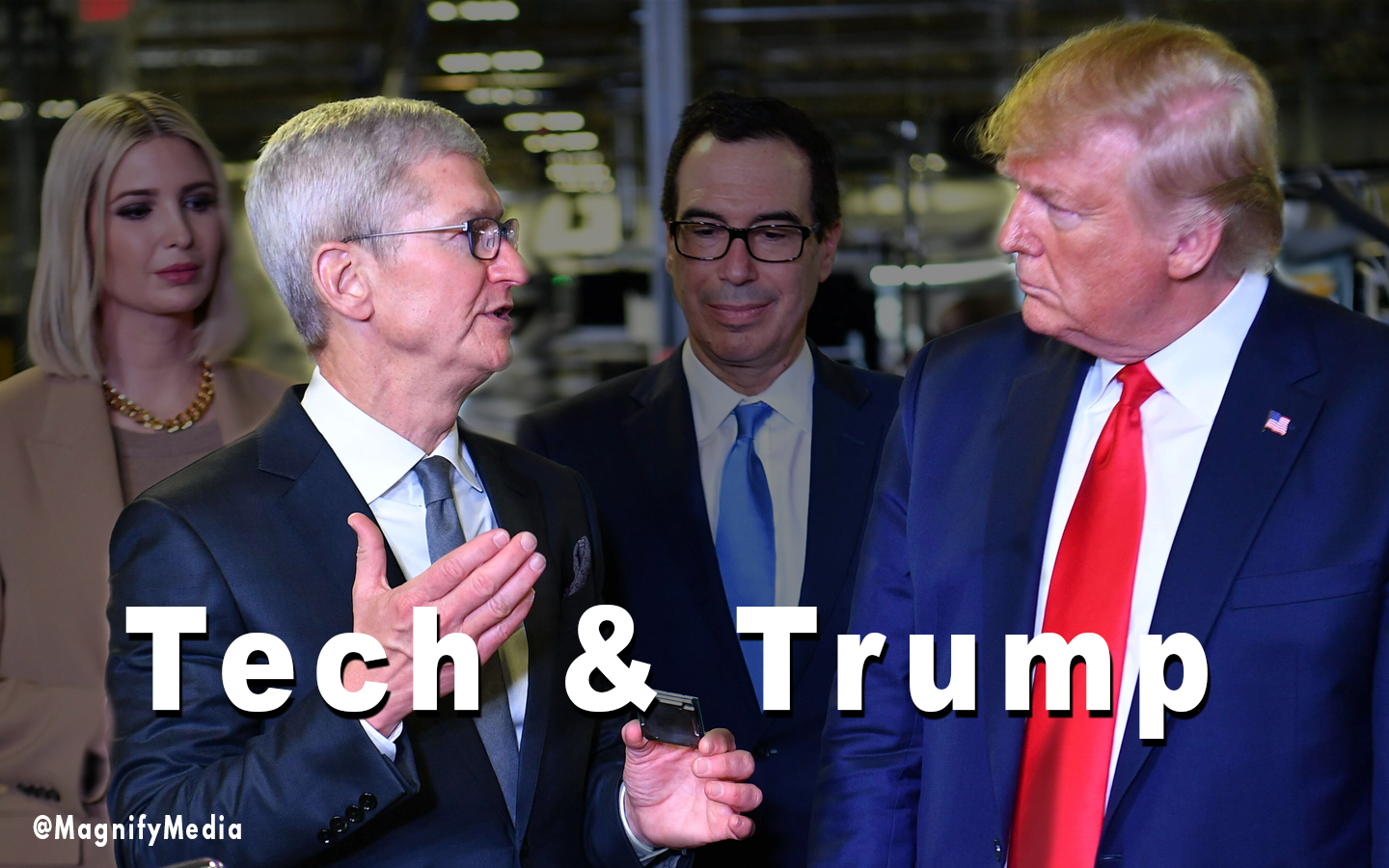 There’s nothing unusual about Donald Trump taking credit for things he didn’t do and blaming others for his mistakes. That’s pretty much every day in the Trump White House.

But on Nov. 20, everyone in the tech industry was caught off guard.

Standing on the factory floor in Austin, Texas, Trump proudly proclaimed  “For me, this is a very special day,” as he took credit for the opening of the Apple Computer plant in Austin.

There was only one problem: The plant opened six years ago, during the Obama Administration.

Still, Tim Cook, who Trump has from time to time called Tim Apple, decided to let Trump have his misguided moment in the spotlight. Instead of correcting the record, Cook said, “I’m grateful for their support in pulling today off and getting us to this far. It would not be possible without them.”

Just to make sure there was no misunderstanding, Trump jumped on Twitter and fired off this doozy: “Today I opened a major Apple Manufacturing plant in Texas that will bring high paying jobs back to America.”

So, is Cook just biding his time, knowing that he’ll be at the helm of Apple long after Trump is out of the White House, or is he operating a more opportunistic -- and, some would say, cynical -- Trump strategy?

While it’s easy to say that Apple’s change-the-world ethos and progressive politics are anti-Trump, in fact Apple has benefited hugely from Trump’s tariff exemptions to the iPhone maker. And Trump even suggested that Apple should build out 5G in the U.S. Never mind that Apple has no expertise building or running networks; presumably Trump could put his fingers on the scale and give Apple some sort of favored national option to build. But that won’t happen. So the charade continues.

But Cook isn’t alone in trying to manage the often-complicated dynamics of this White House.

One issue on the minds of many U.S. tech leaders is Huawei and growing security concerns around the use of the Chinese company’s equipment. Seven telecom CEOs traveled to the White House this summer for a tech summit. They were Sanjay Mehrotra of Micron, Stephen Milligan of Western Digital, Steven Mollenkopf of Qualcomm, Sundar Pichai of Google, Chuck Robbins of Cisco, Robert Swan of Intel and Hock Tan of Broadcom.

By early October, the administration said it was planning issue licenses allowing some American companies to supply the Chinese telecom giant Huawei some “non-sensitive” goods. It was said that Trump gave the green light for some companies to begin to bypass a ban his administration had placed on Huawei this year.

And then there’s the election.

The campaign is shaping up as a major political challenge for tech companies who faced huge blowback from employees and customers for supporting Donald Trump's campaign and the Republican Party in the last election. Google and Facebook gave the nominees the same technical assistance they lent to other candidates, but now the evidence that these companies were used to power disinformation and fake-news strategies makes 2020 far more complicated.

"It's no longer acceptable for these companies to play both sides like they're equal," Rashad Robinson, president of civil rights advocacy group Color of Change, told Politico. "If they want to invest resources and money into a candidate who believes that there were good people on both sides of what happened in Charlottesville, they're going to have to be held accountable for it."