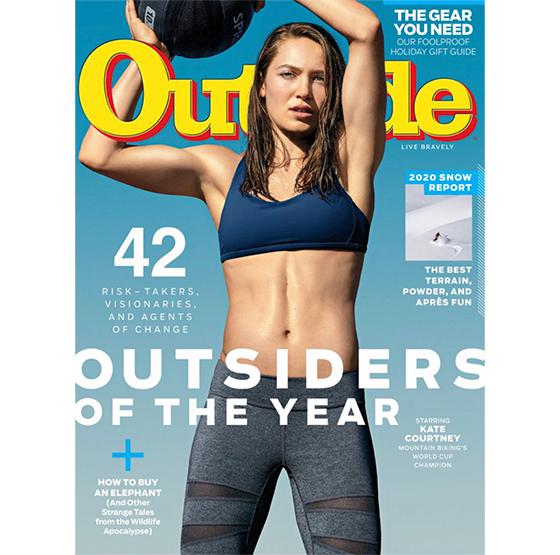 magazine reports a 41% growth in its print audience, according to data from MRI’s fall 2019 study.

Each issue of Outside now reaches more than 3.4 million active readers with a median age of 42 — younger than the median age of readers in the competitive set — and median household income of approximately $91,000.

The outlet’s efforts to reach communities long ignored by the outdoor industry, like women, reflect this growth.

Lawrence Burke, chairman-editor-in-chief, Outside Integrated Media, LLC, cites Outside’s 2017 “XX Factor Issue,” which was produced entirely by women and featured women exclusively, as the brand’s first step in a commitment to diversifying its coverage.

“Since women have seen their perspectives reflected in our coverage, we’ve watched our audience expand. The majority of our growth this year is, in fact, from female readers. We’ll continue to shine a light on women in the outdoors and other communities that have not been represented accurately in the industry,” Burke told Publishers Daily.

Outside notably addressed sexual harassment on its social-media channels last year. Many women readers were grateful the outlet recognized the issue. As a result, Outside saw its digital numbers climb.

Recently, Outside has looked to expand coverage of other overlooked communities, including people of color, people with disabilities and members of the LGBTQ community.

Burke said: “These communities represent a vibrant and growing segment of the outdoor industry population, yet are not often reflected in adventure media, industry advertising or the environmental movement.”

In addition to growing its print readership, Outside has also welcomed expansions across platforms, including experiential and television and film, through the recently launched Outside Studios.

In July, Outside launched its first live consumer event in Chicago. Called Outside Experience, the event hosted over 7,000 attendees and 125 exhibitors in its first year, in addition to support from sponsors. The event will return for a second year in May 2020.