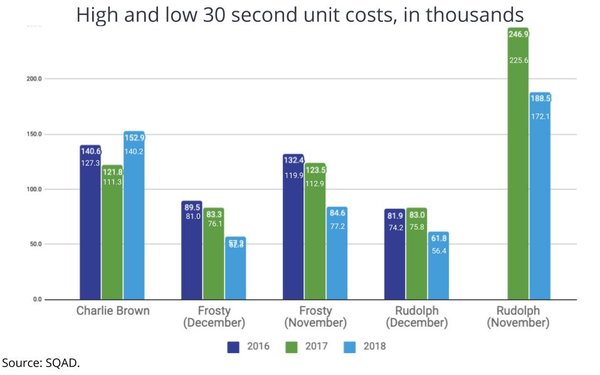 Demand for the major annual holiday season specials spikes in November, but actually declines in December just before Christmas, according to an analysis of actual ad prices yield by the networks airing them over the past three years.

The analysis, released by TV ad prices tracking firm SQAD, shows the high and low 30-second unit costs for the major holiday specials, and while CBS' November telecasts of "Rudolph the Red Nosed Reindeer" has been fetching the highest rates, its December telecasts are yielding less than half November's rates.

While the price disparity is not as notable for CBS' annual airings of "Frosty the Snowman," November telecasts have consistently yielded prices significantly higher than those aired in December.

ABC's annual telecasts of "A Charlie Brown Christmas," which airs only in December, however, has consistently yielded some of the genre's highest annual rates.

The November and December ad pricing differential likely reflects somewhat lower audience ratings in December than November, but it definitely reflects the lower overall demand for advertising in December.

November historically has the highest national ad demand, including for television, of any month of the year.

To get a perspective, click on the national TV market tab of the U.S. Ad Market Tracker below, and scroll over November's indexes.